I heard it before I saw it as I reached the summit of the Greater Lovell Land Trust’s Flat Hill this afternoon. The rhythmic tapping sounded as if a structure was being built and so I looked upward expecting to see a treehouse under construction. Scanning all the trees in the mixed forest, I saw only their crowns.

And then I smartened up and looked at the snow. Bingo! Fresh debris atop this week’s layers of snow from two storms and I had a better idea of the construction worker’s location.

Sure enough, high up in a deteriorating yet live red oak stood the one with a crown all his own–brilliant red as it was in the afternoon sun. By the red mustache on its cheeks, I knew the pileated woodpecker was a he. Call him either PILL-ee-ated or PIE-lee-ated; the word means “crested.”

Sometimes, when these birds are intent on their work, I find I’m able to quietly move in a wee bit closer. Mind you, he was up quite high (at least 25 feet above me) and there were other trees between us. I hoped if he was aware of me that he knew I meant no harm. I just wanted to observe.

And so I did for a good while. Check out that chisel-like bill.

In a seemingly effortless manner, he pounded away. Did you know that a pileated can peck up to 12,000 times a day? Not all on the same tree, of course.

Thank goodness for extra-dense neck muscles and a compressible skull bone. Between hammering, this guy paused periodically. To admire his work? To check on the food supply? Or just to take a break?

Can you see one of his four-toed talons grip the edge of the excavation site?

One cool thing about woodpeckers is how they use their tail feathers for support–as if the third leg on a three-legged stool.

As I watched, I noted that Woody Woodpecker, a name I give all pileateds because their rattling call reminds me of the television cartoon I grew up with, kept digging a bit deeper.

Then he’d take a break and turn his head away from the tree and I finally realized that the tree was at such an angle that to remove debris he needed to drop it below.

Eventually, he flew off and so I checked on the woodchips in hopes of finding scat filled with insect body parts. There was none. For all of his work gouging the oak, he didn’t seem to have found any carpenter ants or wood-boring beetles. Maybe that’s why he moved on. And so I did as well.

About halfway down the trail, I came upon a sight that might have delighted the woodpecker. I know I was thrilled.

On his website “Bug of the Week,” entomologist Dr. Michael J. Raupp explains, “They belong to a small order of insects known as Mecoptera. The “scorpion” moniker derives from the fact that males in this group have unusually large and upward curving genitalia that resemble the stinger of a scorpion. The “fly” part of the name comes from the fact many species of Mecoptera have wings and can, well, fly.”

To fly and not to fly. Predator and prey. Despite their extreme differences, both finds today certainly struck me as being prehistoric creatures of western Maine.

I remember a time when a Pileated Woodpecker sighting was rare. And now, it’s a daily event, but one which I still feel blessed to experience. 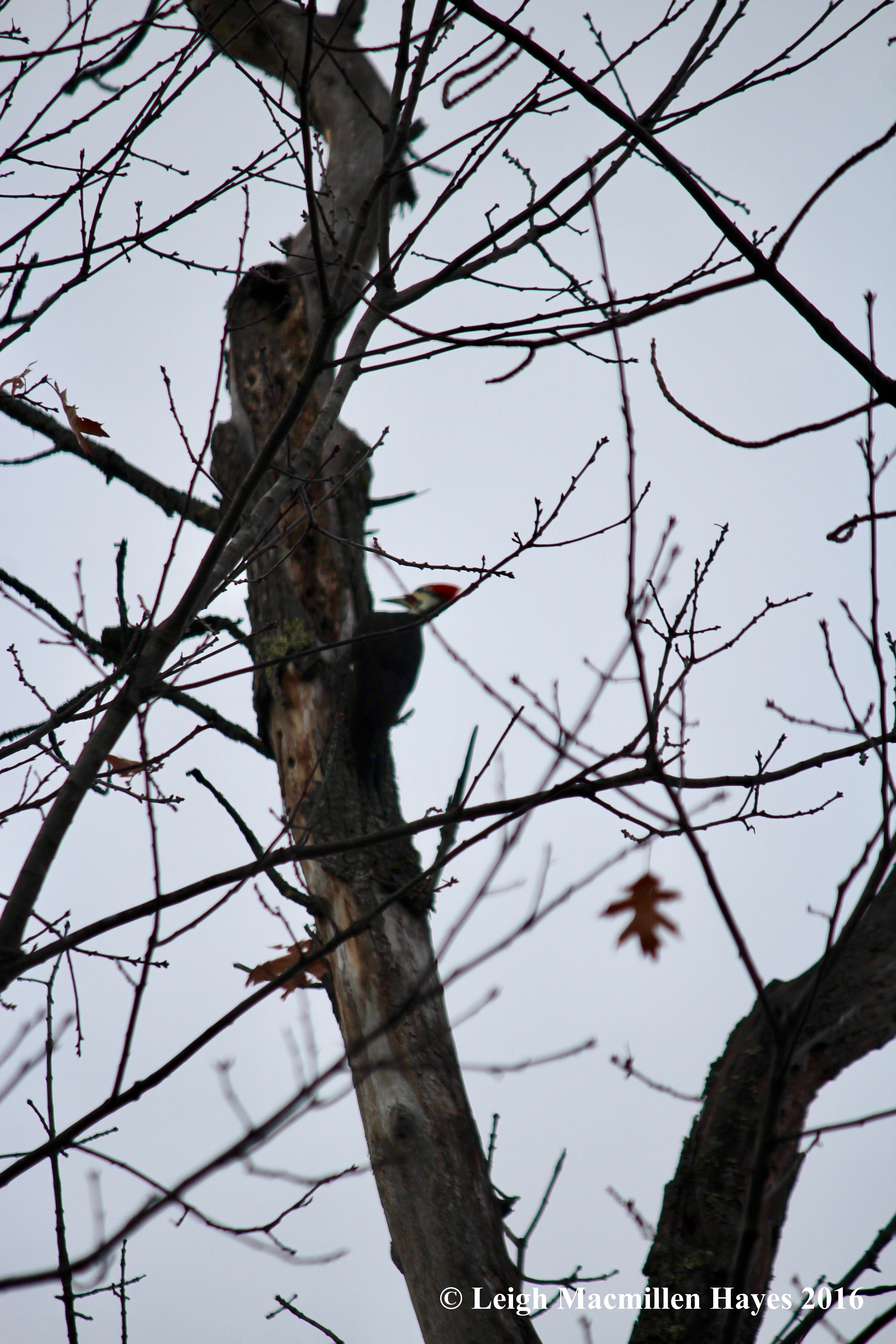 Stepping out the door this afternoon, I immediately heard one hammering and realized another was drumming in a nearby tree. Within minutes, a third flew in and birds #2 & 3 sang their eerie tune as they approached #1. He chased the couple and they flew off, their flight strong, and marked with slow, irregular woodpeckery flaps. 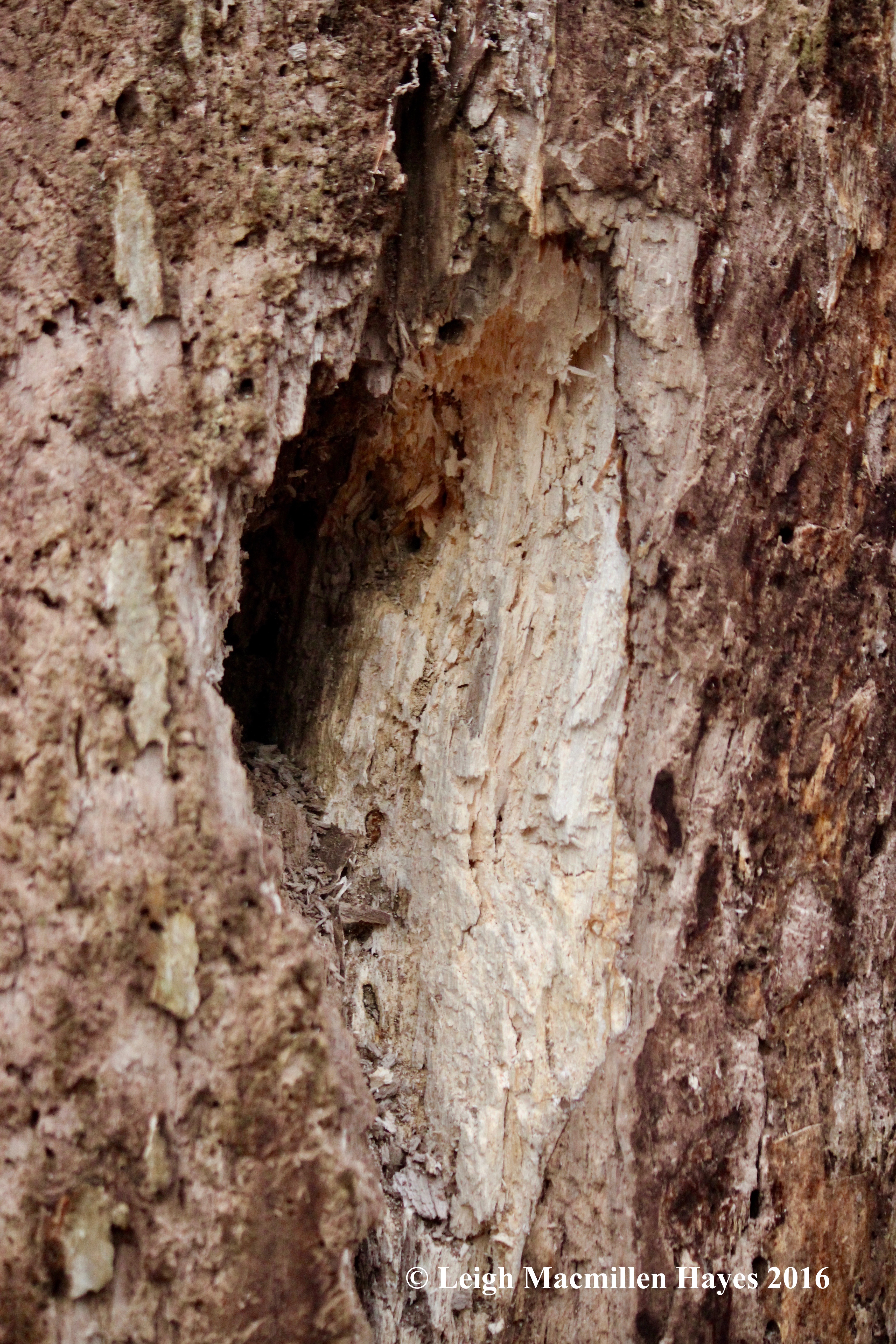 After watching #1 for a bit, I went in search of woodpecker happenings scattered throughout our woodlot. Though they’ll eat lots of wood-boring insects and occasionally berries, seeds and suet, carpenter ants are their mainstay. Better in a woodpecker’s stomach than our home. Sometimes the holes they create are about six inches across and almost as deep. 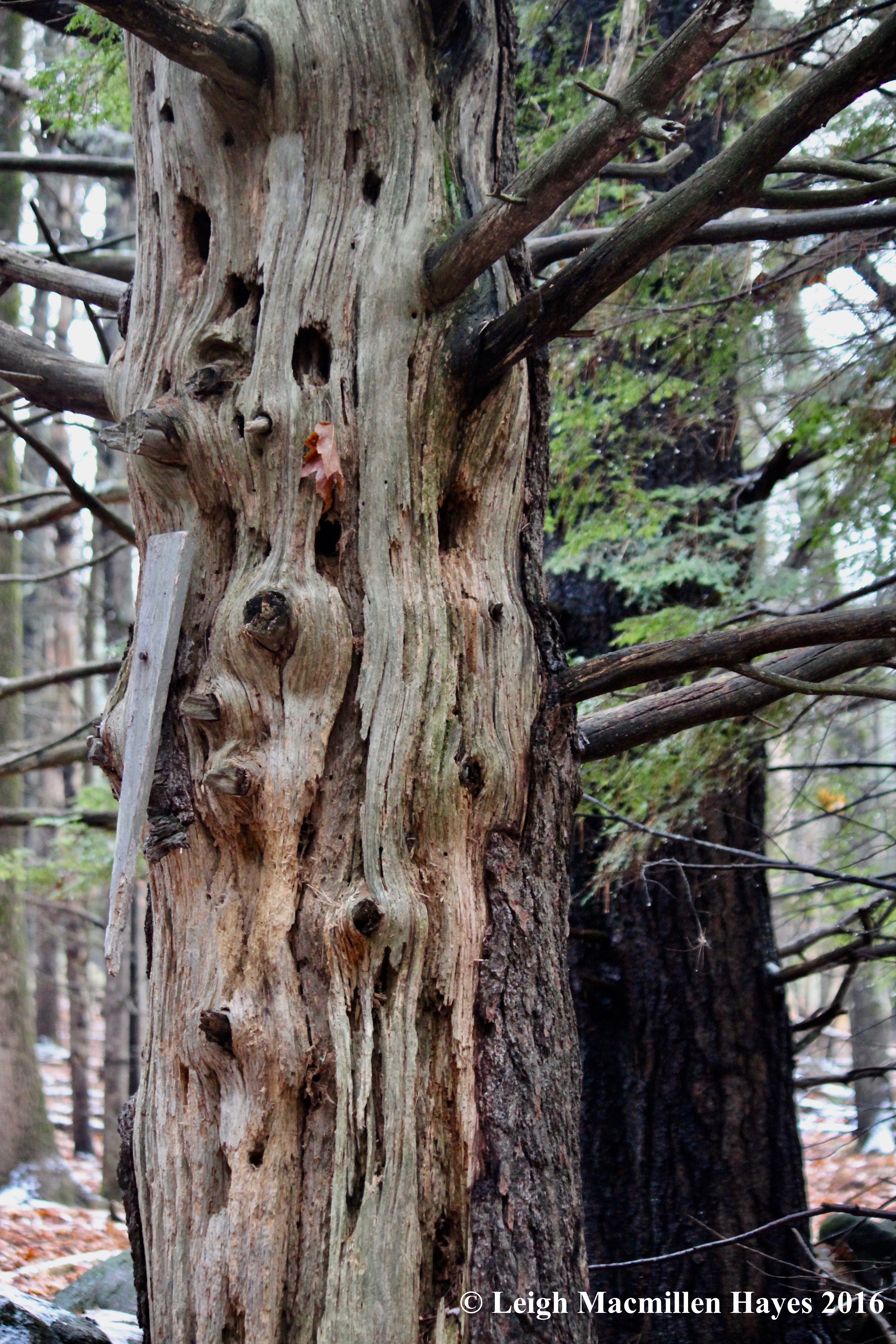 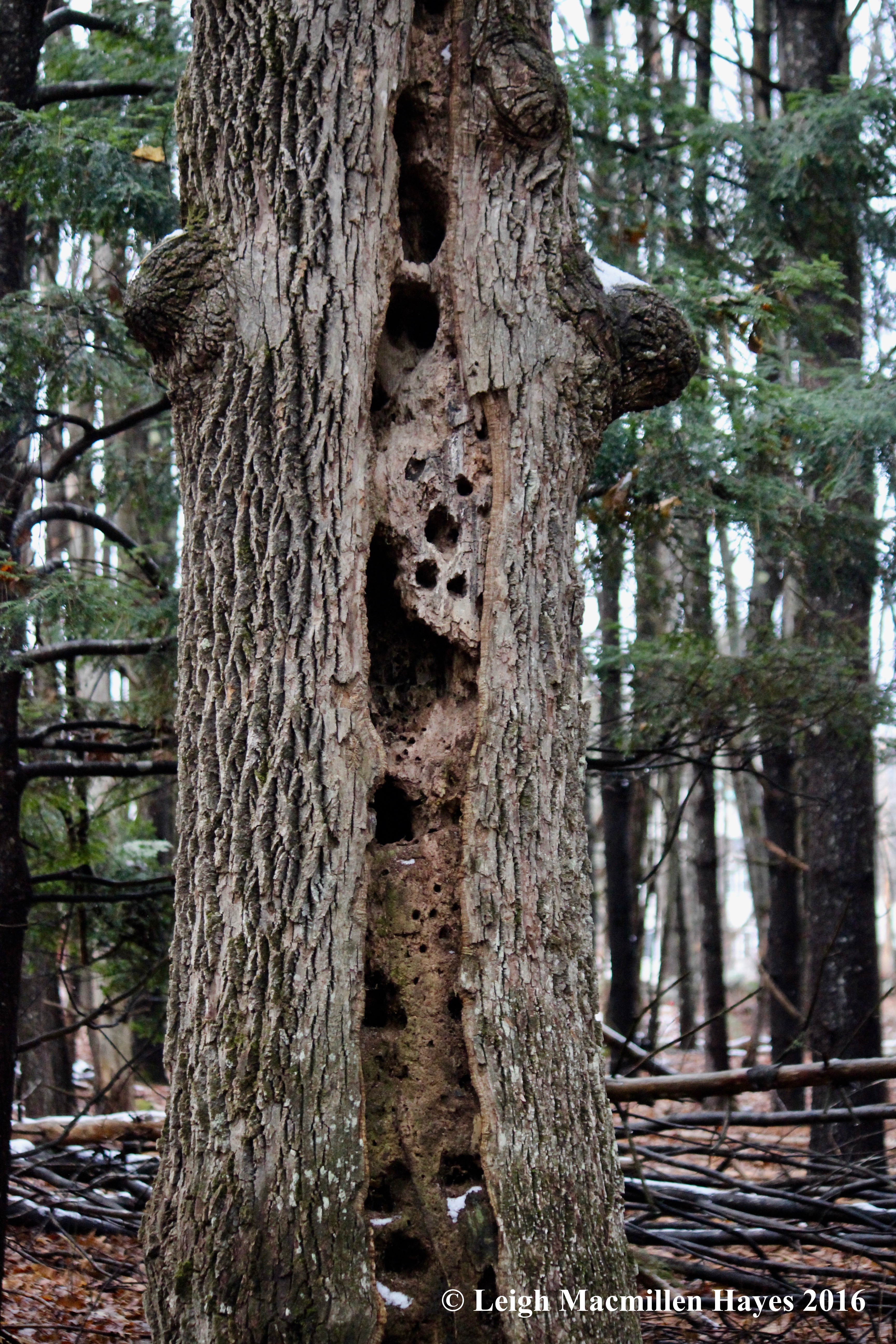 And those holes became homes for other critters occasionally, so when friends and I see trees such as these, we think of them as condominiums providing living quarters perhaps for small birds and little brown things (mice). Included in these condo units are some smaller round holes, created by the Hairy and Downy Woodpeckers that also live in our neighborhood. 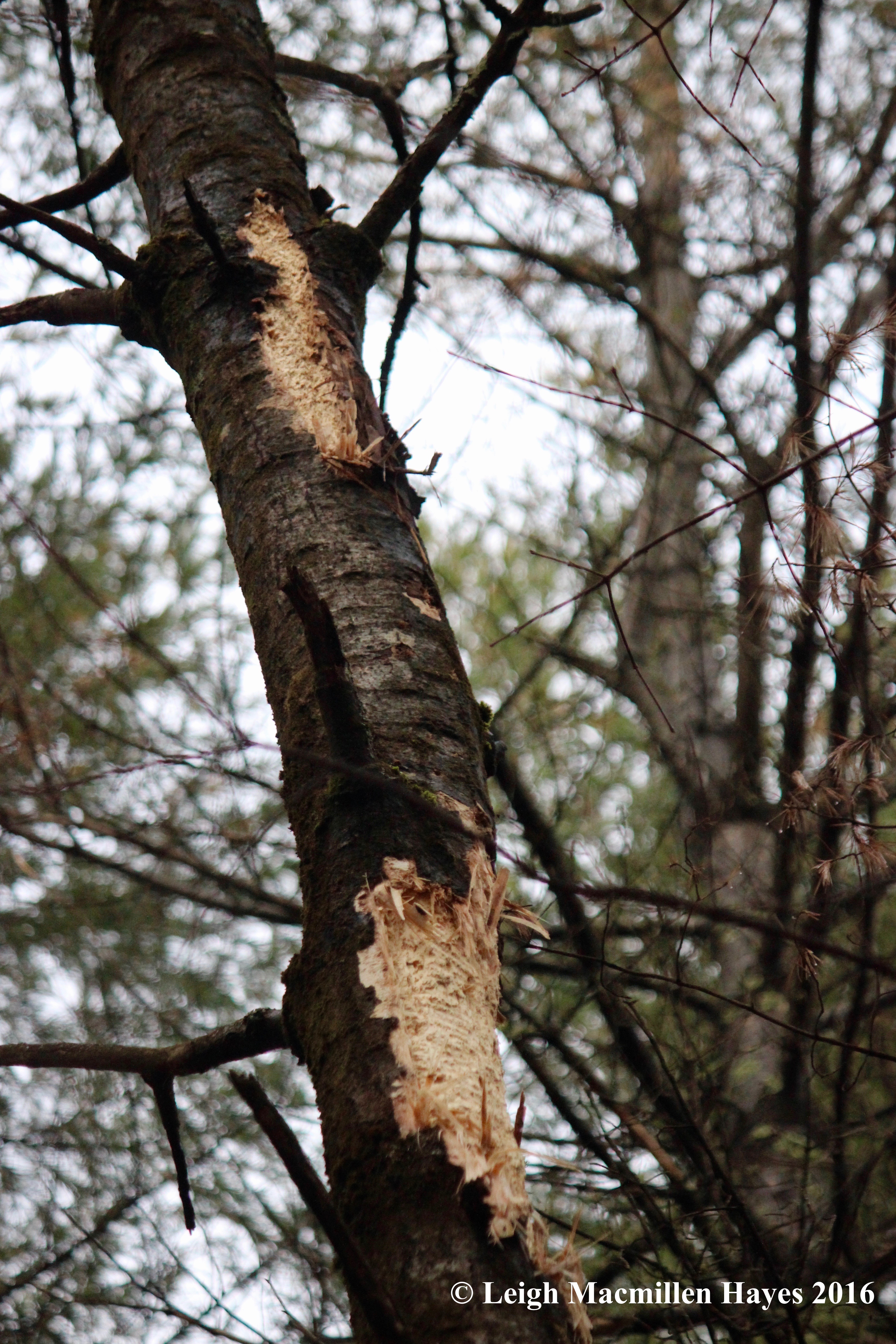 Occasionally I come across trees such as this one that hadn’t been so much excavated as chiseled. Woodpeckers are just that–peckers of wood. They don’t eat the wood. But to get at their preferred food, they must hammer, chisel and chip the bark. 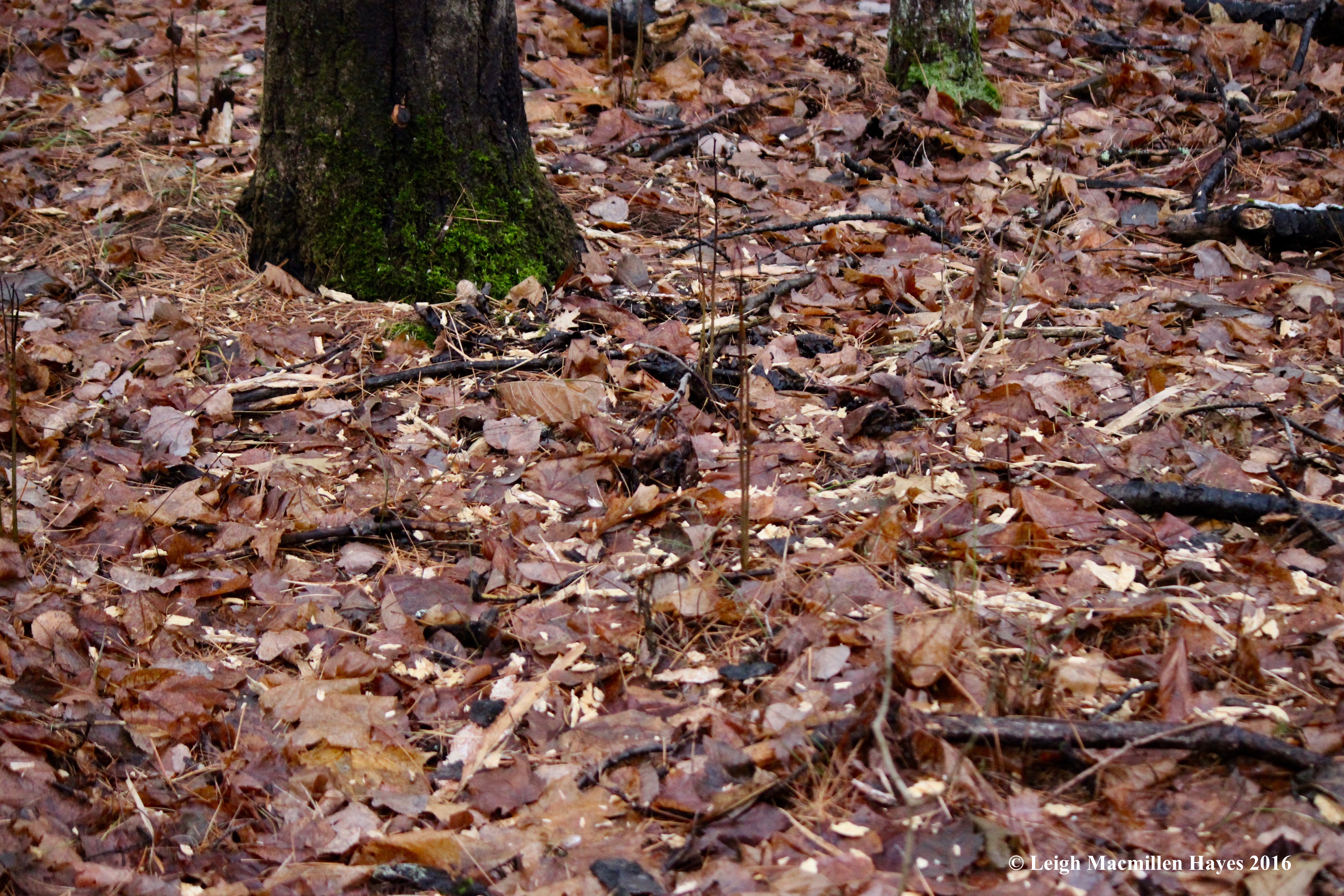 At the base, always a scattering of wood chips. I, of course, cannot pass up any opportunity to search through the chips in hopes of locating scat. I was not rewarded with such a find today. 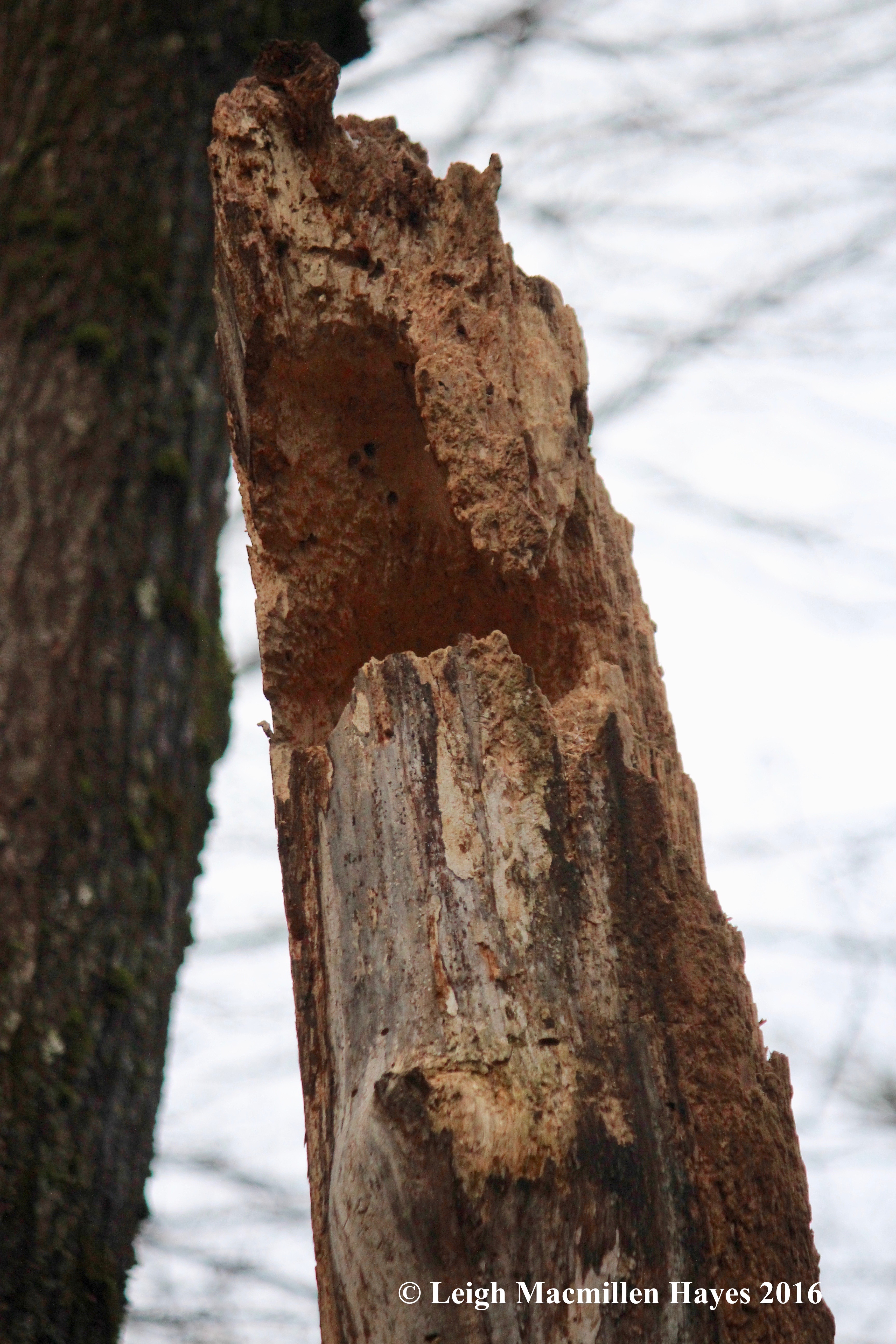 Leaving dead snags encourages woodpecker activity. They become prime locations to forage, roost and maybe even nest, though I hardly think this snag was large enough to serve as the latter. 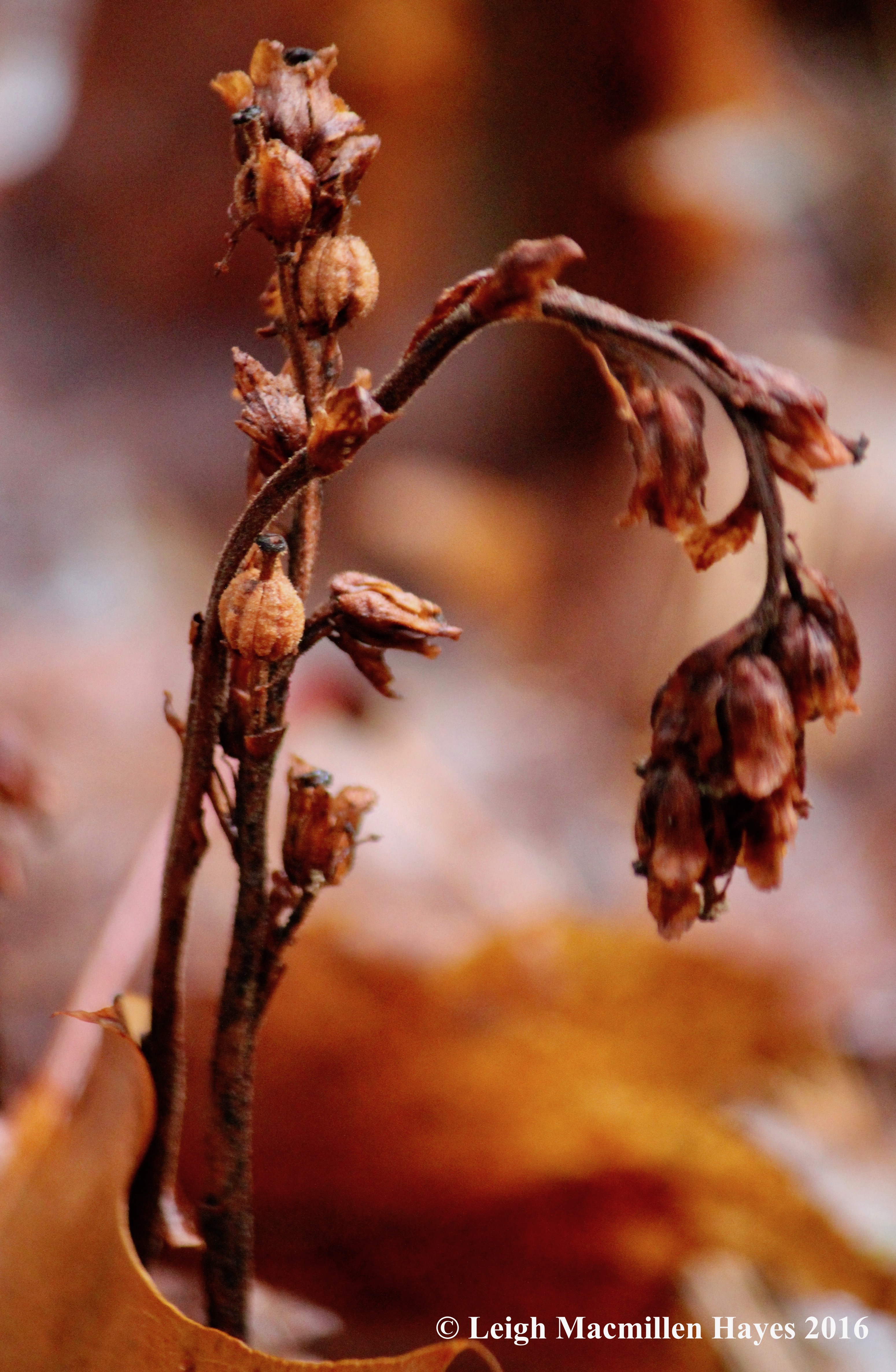 While I was out there, I did stop to admire a few other sights including the now woody structure of pinesap; 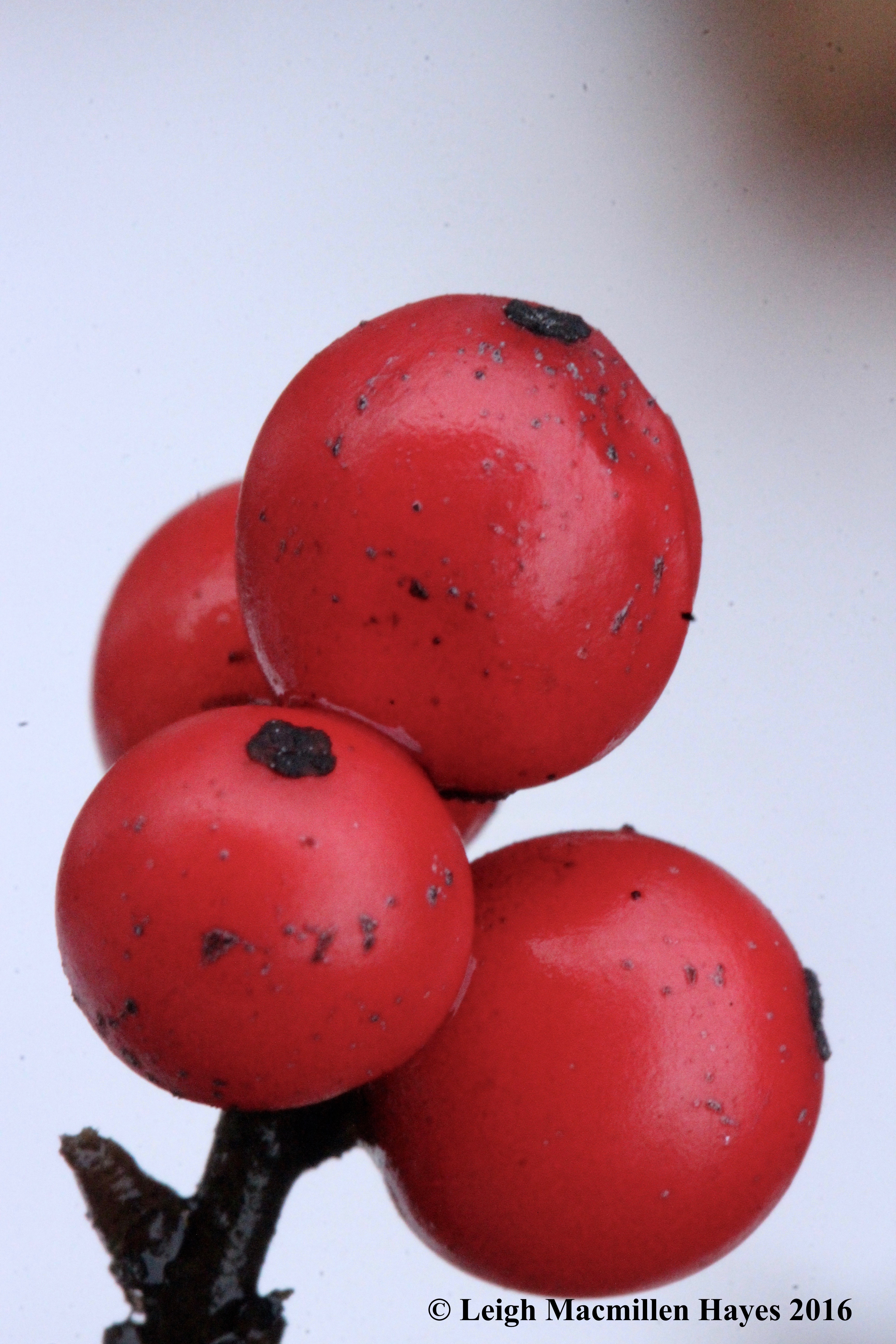 winterberries contrasted against the wee bit of snow that still graces patches of ground; 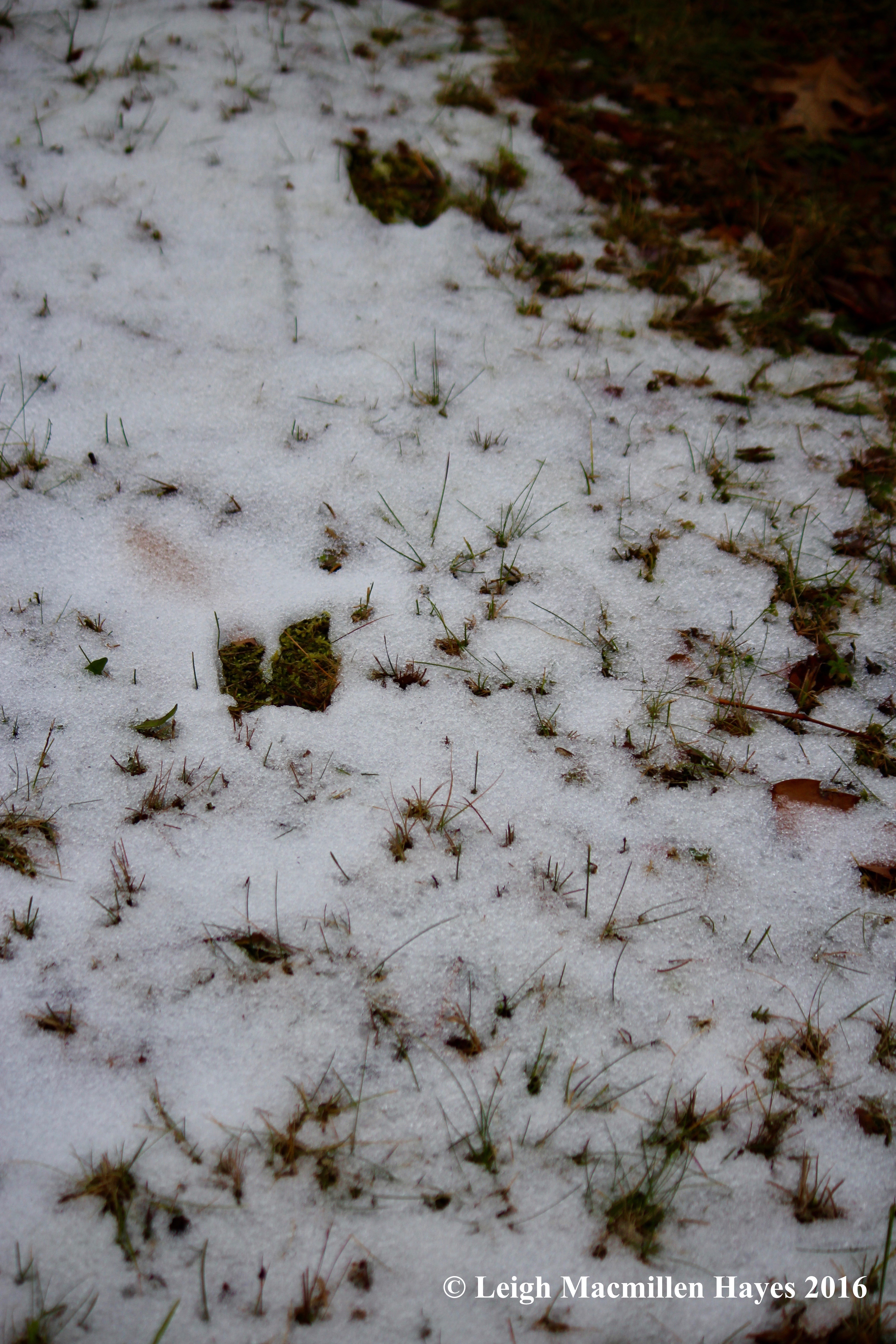 deer tracks indicating we’d had visitors during the night; 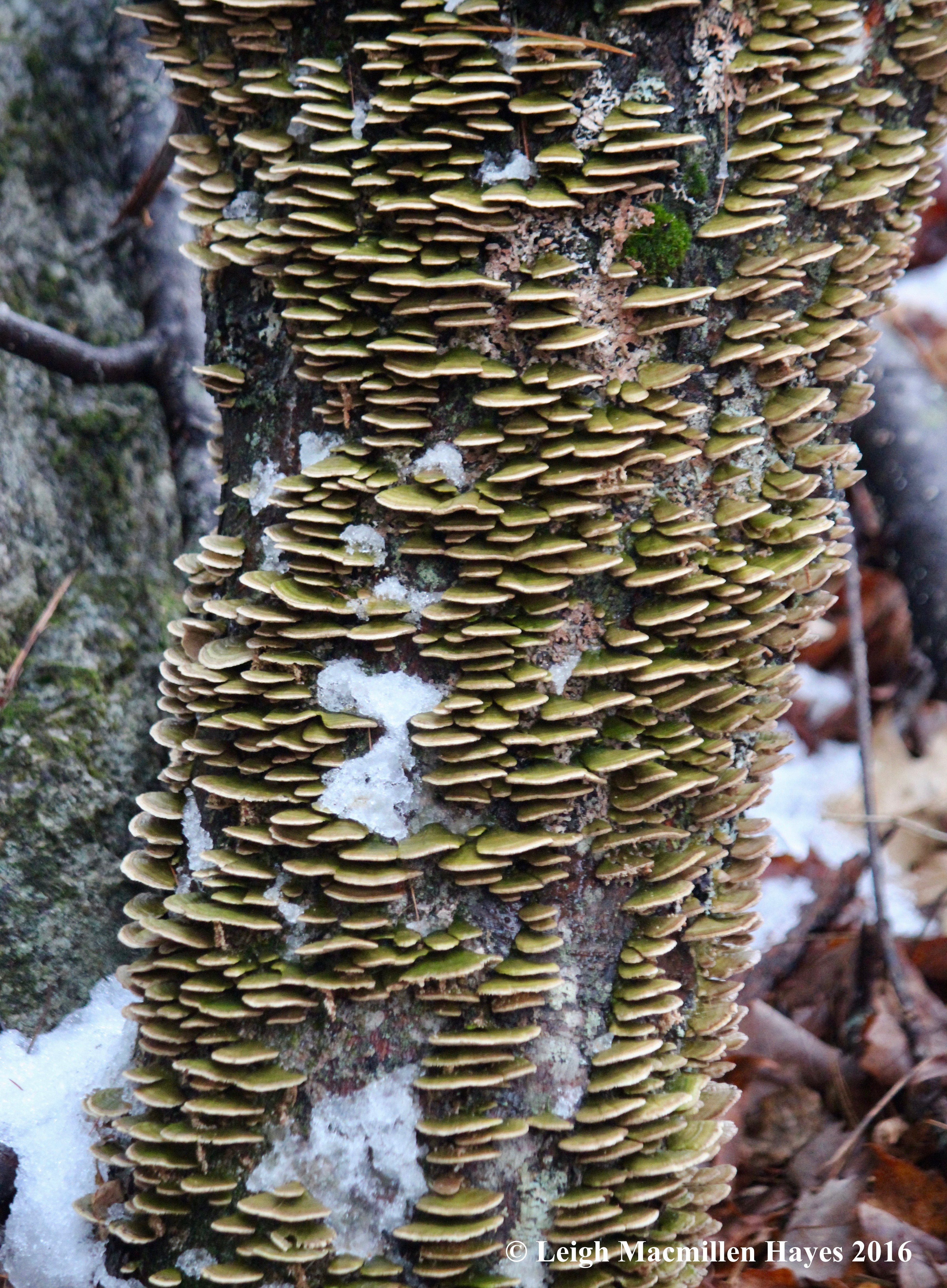 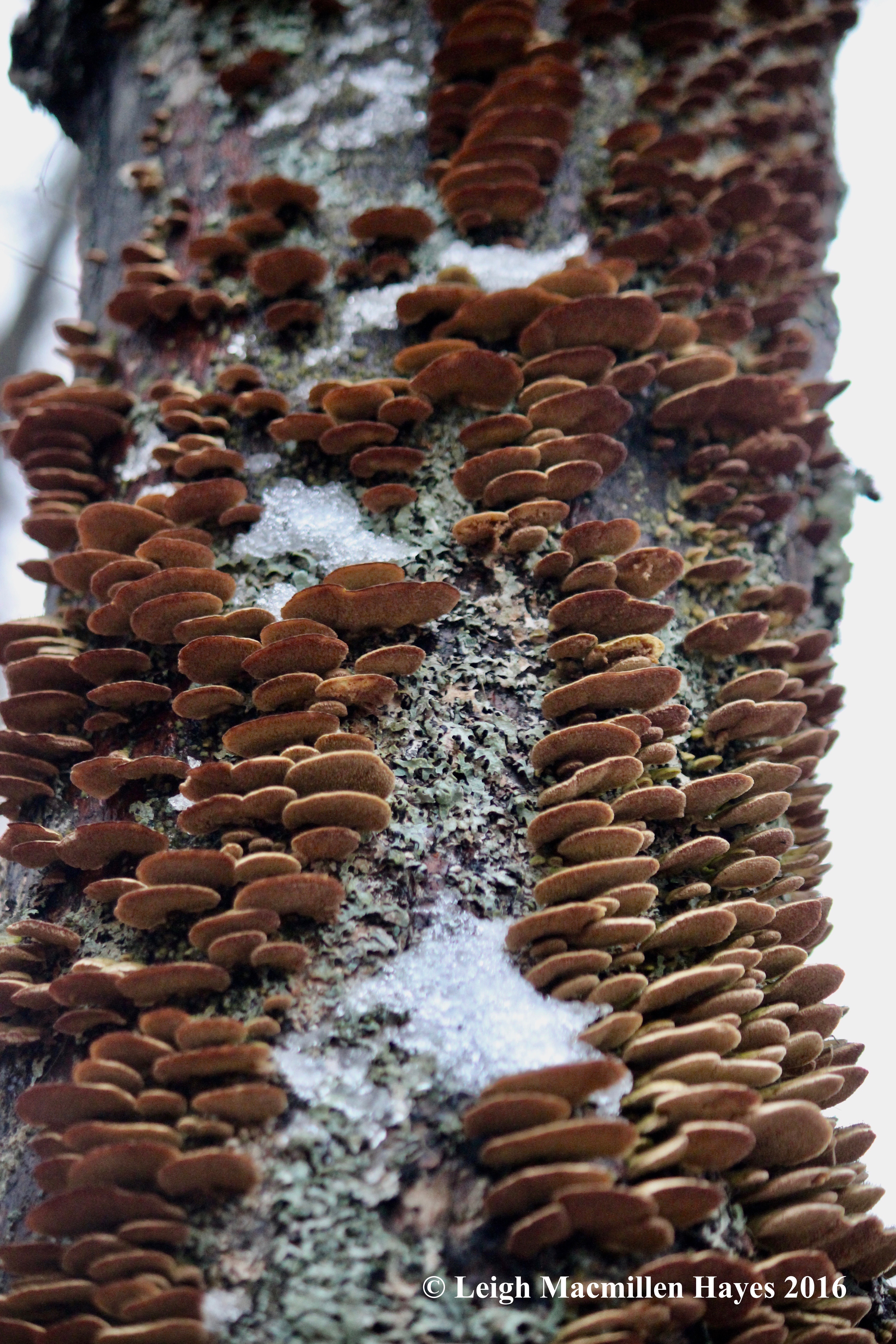 and a tree skirt of violet-toothed polypores. They are rather like the Lays Potato Chips of the natural world. You can never have just one. (Note: I’m not talking about eating them, but rather how they grow.) 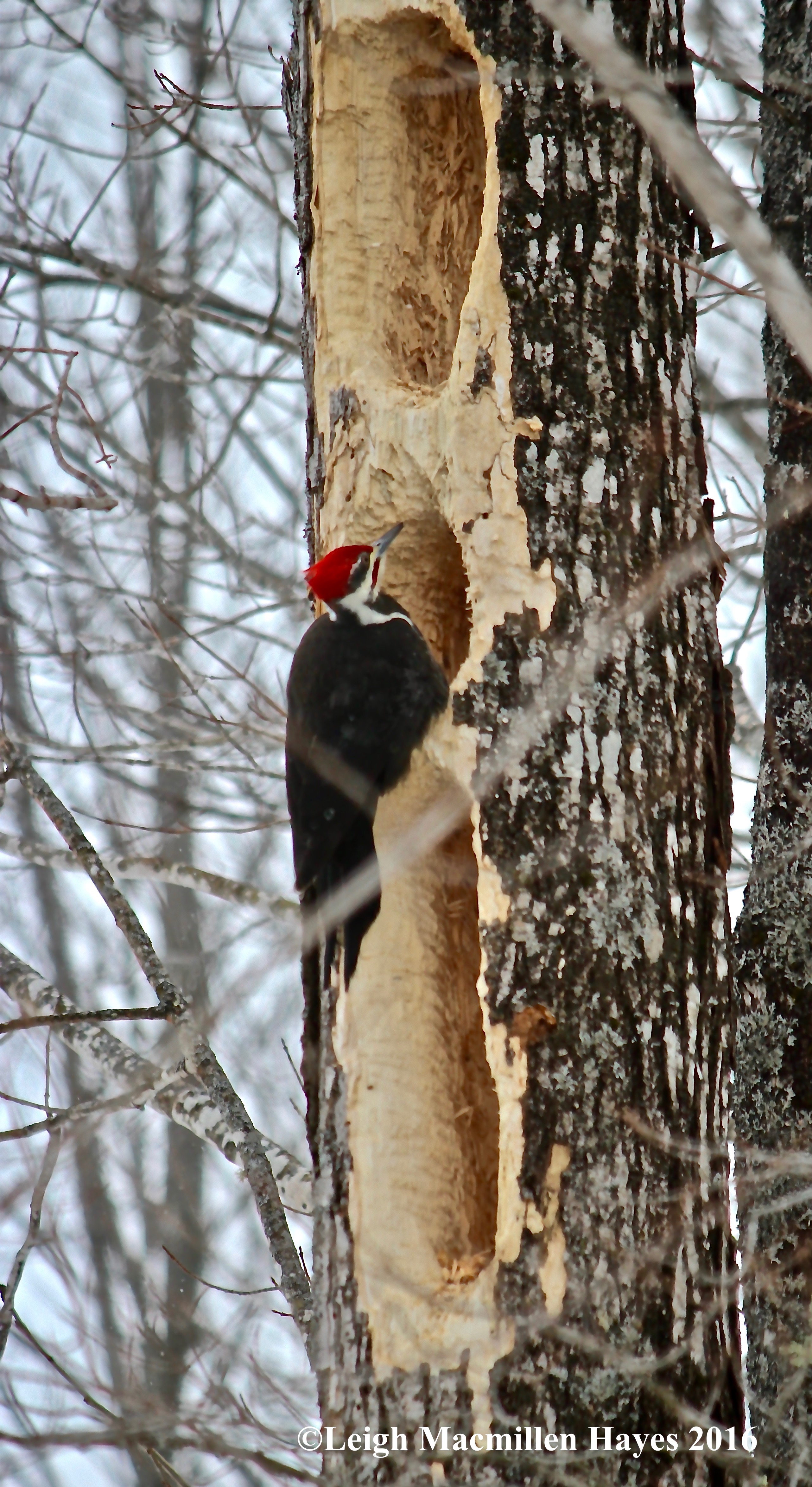 It’s been said that Pileated Woodpeckers are skittish. That’s not always the case. I’ve stood beneath one for over twenty minutes, the bird intent on its work and seemingly oblivious to my presence.

The next time you are in the woods and hear the ho-ho-ho ho ho, ho-ho-ho ho hoing that reminds you of that cartoon character, Woody Woodpecker, take a look around. You, too, might be blessed. And don’t forget to check for scat. 😉