A wander at Wilson Wing Moose Pond Bog Preserve is the perfect way to celebrate the start of snow season. The 20.7 acres of land near Horseshoe Pond that was donated by the Wing family combined with the twelve acres surrounding Sucker Brook that The Nature Conservancy previously owned create the Preserve, which is a Greater Lovell Land Trust property.

My friend Jinny Mae and I donned our snowshoes and headed off on the trail, not sure what we might find. It was snowing lightly when we started, so we didn’t expect to see any mammal tracks. 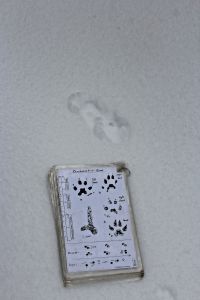 Thus we were delighted with our finds–especially this one which was rather fresh. A look at the formation and we knew we had a member of the mustelid or weasel family. A few measurements of prints, straddle and stride–and we determined it was a mink. 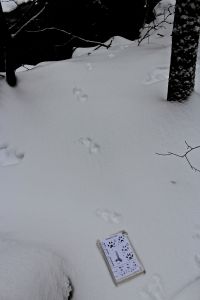 In true mink fashion, it enjoyed a slide into the brook. We also saw mice, red squirrel, deer, bird  and domestic dog tracks–some were blurred by the snow, but the pattern and behavior helped us come to a conclusion. Well, the bird stumped us at first. It wasn’t clear at all. But then we saw juncos. And under the platform were clear prints beside some muted ones.

Though we neither saw nor heard any red squirrels, their presence was well pronounced. I was surprised to see a midden. All fall, I searched for caches. Usually cones are piled in various places, but this year I found only a few. Were they fooled by the warm weather? 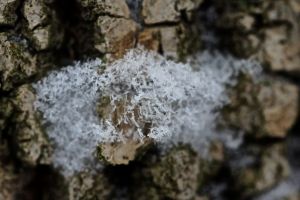 I don’t know if it’s because it is winter and everything seems more pronounced or what, but the ash bark appeared chunkier and corkier than ever. Of course, the snowflakes added to the scene.

We were beside Sucker Brook, which flowed with winter magic.

And ice. Its many forms of presentation always fill me with awe and wonder. 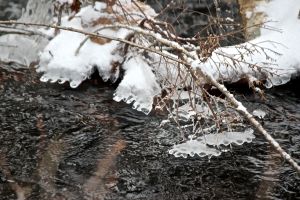 And whimsy. Check out these gigantic feet and

the hemline of this snowy skirt.

Another favorite (oops, I forgot, everything is my favorite, but these really do stop me in my tracks–or snowshoes) is hobblebush. In any season this shrub provides an incredible display, but its the winter buds that are especially astounding. (OK, wait until it blossoms and I’ll be saying the same thing.) While most buds have waxy scales that protect the leaves, hobblebush is naked. The same is true for witch hazel buds. What you see in these photos, is miniature leaves clasping each other. And embraced within, the flower bud. Here’s hoping the snow provides warmth until spring. 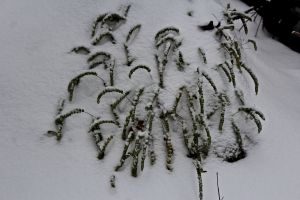 Another “favorite” display adorned a rock hidden beneath the snow.

Common polypody ferns seemed to hold the snow tight between their curled blades. That made us pause and wonder once more.

And because we did so, we realized that clusters of sporangia were ready to catapult their spores into the world. 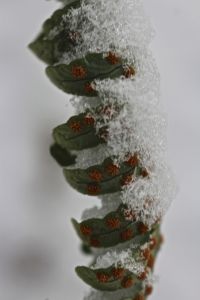 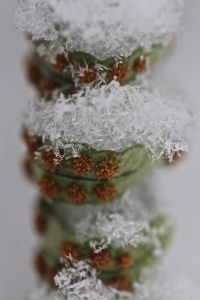 They look like miniature clusters of balloons waiting to broadcast the arrival of a new year. But, why were the pinnae curled inward? It’s certainly not a stance that would protect the spores–those are to be spewed outward in order to further the population. We know that the blades curl up if conditions are dry, but it’s hardly been dry the past few weeks–lots of rain and now snow. My research turned up little, but I wonder if it’s a protective measure similar to the rhododendrons in our front yard. As nature’s thermometers, they let us know what the temperature is based on the behavior of their leaves–about 40˚ they extend outward, about 32˚ they droop and in the low 20˚s the rhodies’ leaves curl. I’m always sure they will die and drop off, but that’s not the case. Could it be the same for the polypody? Do their dense covering of scales located on the underside prevent the loss of moisture? Now I need to keep track of the temperature and see if it follows the same pattern.

Worth a wonder. Worth a thanks to the Wing family (and especially Dr. Wilson M. and June Wing) for helping to make the Preserve a place for all of us to wander.

8 thoughts on “The Wonders of Wilson Wing”