My friend, Dick, sent me the following message yesterday: “from a novel, Northwest Angle by Krueger … who has a series which relates to the Objidwa (sp) of the upper parts of Michigan …

‘What’s a Mide?” — ‘A member of the Grand Medicine Society,’ Stephen explained. ‘A healer. Somebody who understands the harmony of life and how to use nature to restore harmony when it’s been lost.” p246

“Belongs.” Meloux (a very senior shaman type of the Native American ‘Mide’ of the Objidwe) seemed to consider the word. “I believe no one belongs to anyone else. You, me Waaboozoons, we are all dust borrowed for a little while from Grandmother Earth. And even that dust does not belong to her. She has borrowed it from all creation, which is the Great Mystery, which is Kitchimanidoo. And if you ask this old man, I would say that another way to think about Kitchiimanidoo is as a great gift. Kitchimanidoo is not about keeping. Nothing belongs to anyone. All of creation is meant as a giving.” p 269

While I haven’t read the book or any of Krueger’s works, these words resonated with me as I moved about this morning.

My first stop was a visit to the vernal pool, where the ice is beginning to melt.

I looked for insects and found instead birch seeds and scales–meant as a giving. 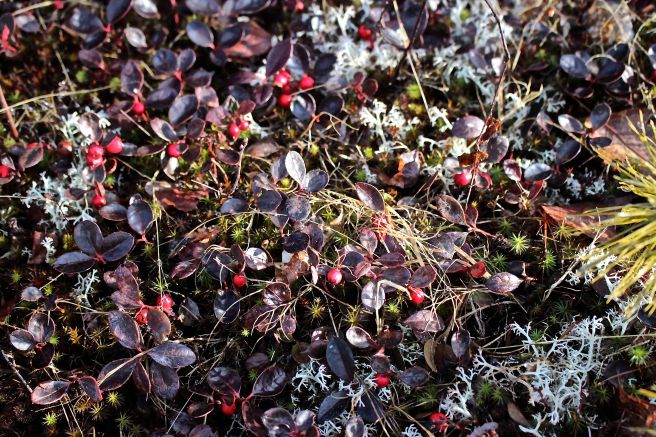 Wintergreen berries remained prolific below the power lines. While this fruit is traditionally browsed by a variety of mammals, I had to wonder if its location is the reason it was left untouched–poisoned by the herbicides Central Maine Power uses to keep the land clear. What was meant as a giving revoked.

Not all was bad as I followed the trail for a distance and enjoyed the beauty that has begun to emerge.

The pompom heads of sphagnum moss contrasted brilliantly beside the running clubmoss.

Looking back, I noticed that today’s sunlight was captured in yesterday’s raindrops–certainly a reason for thanks-giving.

And before me–man and nature in the eternal struggle for harmony. An example of borrowing.

Before I turned onto a logging road, a puddle caught my attention.

My first thought was pollen, but as I approached, I realized the little dots were moving about much like spring tails because .  . . they were spring tails. So my learning increased as I noted their color and the fact that there are aquatic members of this family. Another giving received.

On recent treks, my bark eyes have been confused about two trees–black birch (aka sweet or cherry birch) and pin cherry. As youngsters, both feature reddish-brown bark. What has thrown me off is the association with other birch trees, including the yellow birch that grows behind this specimen. Today, I made a point of noticing–the warty orange lenticels, lack of catkins and no wintergreen scent. These are three features that helped point me toward pin cherry. Black birch bark features long, thin lenticels, catkins common to birch trees and when scraped, that delightful wintergreen smell.

Despite the fact that they are not of the same family, certainly they’ve found a way to give to each other and live in harmony. A lesson.

Just beyond the birches, in one of many stump dumps along this logging road, something caught my eye.

A porcupine worked over the bark of a fallen hemlock tree. I stood for several minutes and watched. Either it wasn’t aware of me or I didn’t pose enough of a threat.

The leaf caught on its backside made me chuckle and wonder why we don’t see more of that. 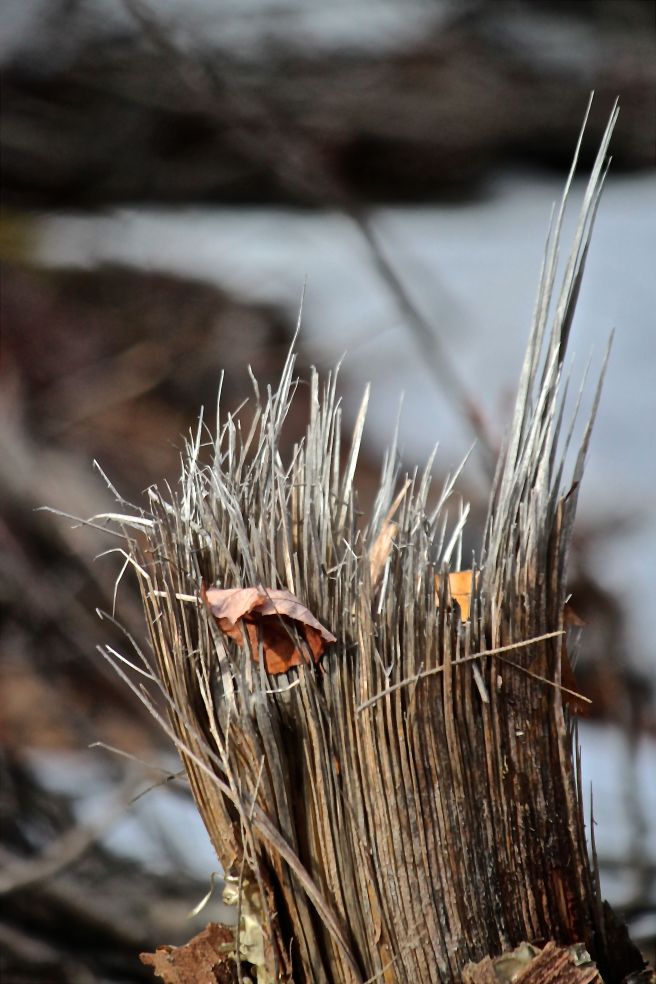 I’m amazed that I saw it at all in this land that has been chopped up over the course of the last three years. Notice how leaves are similarly stuck to this shredded tree stump. 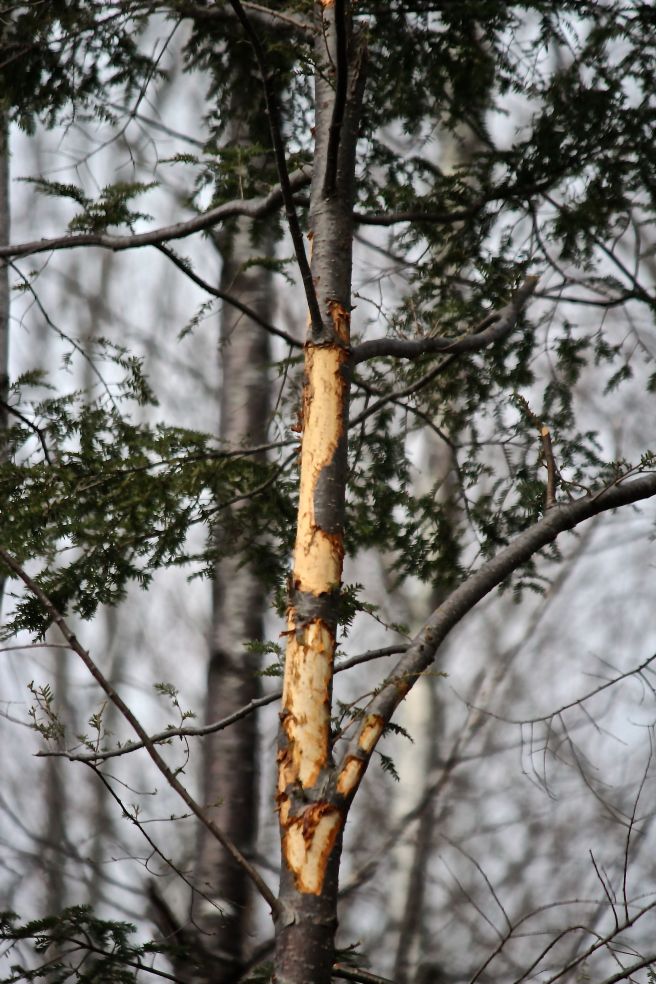 Behind were the trees that have received the porcupine’s recent attention. While the logging is destructive, it helps heat homes, provides income to at least several people including the logger and landowner, and creates new habitat and food opportunities for wildlife. Change is difficult and I’d grown to love these woods the way they were, but they were that way because of prior cuttings. A borrowing.

Most of the logging road was a combination of puddles and mud. At times, air bubbles rippled as I moved through and I was reminded of my youth years spent feeling for clams in the mudflats of Clinton Harbor on Long Island Sound. The memory itself was a giving.

Like the deer that frequent this land, my boots got stuck in the muck. Sometimes, it seemed like I was being sucked in and told to stand still. But my mind wandered on and I followed it.

Going forward in time, I’ll be curious to watch the reflections in the puddles change as the pioneer species move back in and regenerate this land. The harmony. 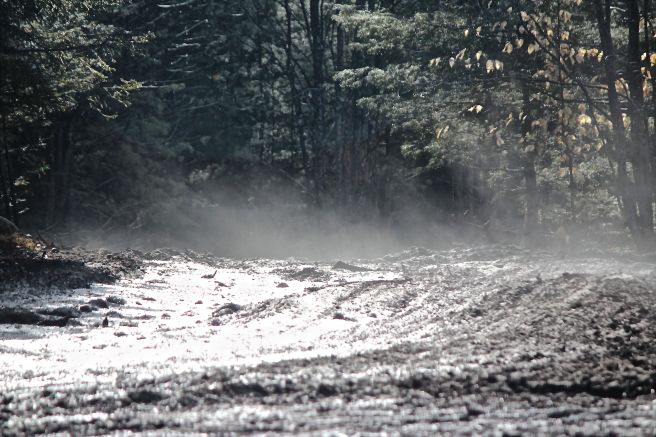 In the end, as always seems the case, I was on the receiving end of the giving and grateful for the borrowing as the spirit of Grandmother Earth shared a few tidbits of the Great Mystery.

5 thoughts on “The Borrowing”