When my friend Jinny Mae received an ominous diagnosis in June, she faced it with admirable spirit and courage. All who know her watched in awe as she  underwent treatment and slowly made her way back into our midst. Despite everything, she continued to spend as much time in nature as possible, whether observing from her chair by the window, walking her dogs or eventually joining friends for tramps. And today–she received fabulous news that I learned about as I was about to hike up Bald Pate Mountain in South Bridgton. She is in remission. INDEED!

So as I did when I first learned of her diagnosis, I took her along with me in spirit on today’s hike. I would have asked her to join me for a celebratory tramp, but it was late in the day. We’ll have plenty of opportunities.

I was on a reconnaissance expedition because I’m leading a hike for Loon Echo Land Trust next weekend. Having Jinny Mae along meant I noticed some things I may have walked by previously. In the end, I discovered a mixture of my favorites and hers. 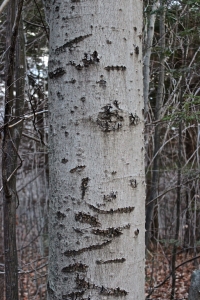 Because there is a beech forest at the base of the mountain, and it’s located adjacent to an orchard, I’m determined to find bear activity. Is this the work of a bear that gave the tree a side-ways slap?

I don’t think so. More likely, the younger trees beside it waved in the breeze enough to create slight scars that have grown with the bark. 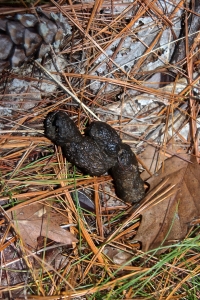 I poked around under a large hemlock, and noticed what I thought was old deer scat. But then I realized that some of it was a wee bit longer and had the curved shape characteristic of porcupines. As I continued to look, I saw that many small twigs had nipped off ends cut at an angle–porcupine it was.

For a while, hemlocks became my focus as I checked under each for signs of activity. On the backside of one, I found this funnel weaver web–standing strong against the elements. It reminded me of someone else.

That someone would certainly have stopped by this old hemlock stump to admire these varnish shelf fungi–it wouldn’t matter to her that they are withered and old. There’s beauty in age.

Every once in a while I felt the nudge to go off the trail and explore–when J.M. keeps track of our tramps on her GPS, the line always zigzags. This rotting log caught my attention. Bear or fisher activity? 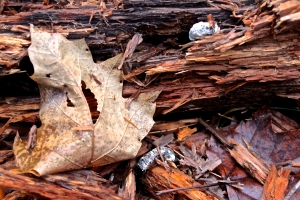 No hair or obvious scratch marks from claws, but some scat–pileated woodpecker scat. I left it there in hopes I can show it to people on the hike and let them see that it’s filled with carpenter ant bodies. 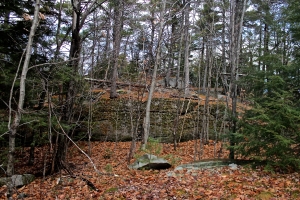 Behind the log was this ledge. A quick look at it and I knew that a certain someone would want to inspect it.

It’s almost completely covered in smooth rock tripe. Sorta looks delicious enough to eat–if you boil it for days on end maybe. Apparently it can be used to thicken stew. Too bad I made stew the other day.

And growing among the tripe–a few polypody ferns, who also appreciate a moist, rock surface. Thanks J.M. for encouraging me to take a closer look.

While I’m on the topic of lichens, here’s one that was new to me. The rust-colored projections among the shiny brown lobes made me squat for a photo call. At home, I thumbed through my go-to lichen book, Lichens of the North Woods by Joe Walewski, and discovered that this foliose lichen is Many-fruited Pelt. Those reddish-brown projections are the fruiting bodies on the leafy margins–thus the name. One for us to learn, J.M. We’ll probably see it everywhere now as it grows on soil, moss or rocks.

And because we like to learn, here’s another–Common Toadstool Lichen. That should be easy enough to remember, given its warty appearance.

At the summit, I paused briefly to take in the views of Peabody Pond and

Pleasant Mountain. It was getting late and I still wanted to hike to the Foster Pond Outlook via the Bob Chase Scenic Loop. 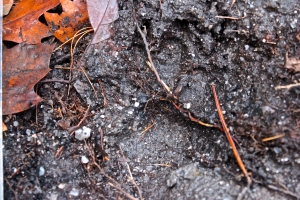 And then, just as I stepped back onto the trail, I saw this print in the mud and a couple in front of it. My heart sang.

I was in bobcat territory. My favorite place to be. I only hope I have such luck next weekend and that I can pull out my David Brown Trackards to show the difference between bobcat and coyote prints.

The substrate changed a few times, but we traveled the same route.

I also found coyote prints. My hope was that since I was hiking so late in the afternoon, I might actually see one or both of these mammals, but that was asking too much. Finding evidence that they’re here is enough. 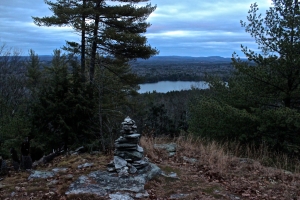 One last view–the Foster Pond Overlook. And then I followed the trail back to the parking lot, thankful to have Jinny Mae along with me in spirit as I rejoiced in her glad news. I’m looking forward to many more opportunities to wander and wonder with her.

8 thoughts on “Rejoicing for Jinny Mae”