No matter when or where I walk, Ursula Duve is always along. She sees what I see, smells what I smell, feels what I feel, tastes what I taste and knows way more than I’ll ever know.

And so it was today that a bunch of us followed this delightful little woman as she led us down the trail at Lakes Environmental Association’s Holt Pond Preserve. 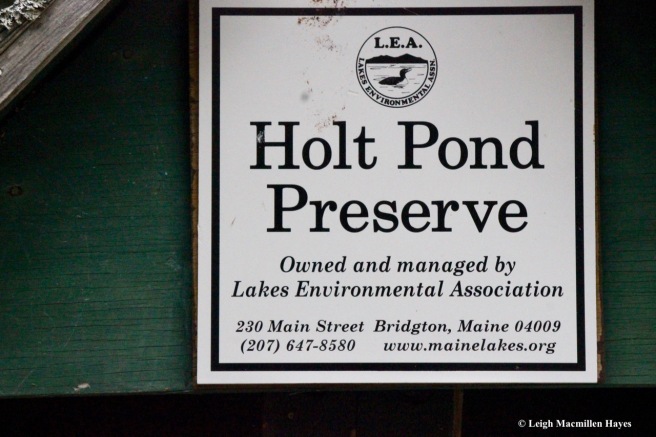 We gathered in the parking lot, where the black flies tried to swallow us whole. But, we got the better of them and practiced mind over matter. Of course, bug spray and our flailing arms helped–or at least made us feel as if it was worth the effort.

After an introductory greeting from LEA’s teacher/naturalist Mary Jewett, we stopped frequently as Ursula shared stories of plants and life. You see, she was born in Hamburg, Germany, and grew up during WWII so she has quite a few memories flowing through her system, but as she reminded us, with the bad comes the good. And the good comes from moments she associates with wildflowers, like this bellwort.

Having lived in the United States for 50+ years now, with the last nineteen in Maine, Ursula considers herself a Mainer despite her German accent because she loves it here. And she knows when and where each flower will bloom, such as the painted trillium.

Even those not yet in bloom drew her attention–this being a chokeberry along the first boardwalk. 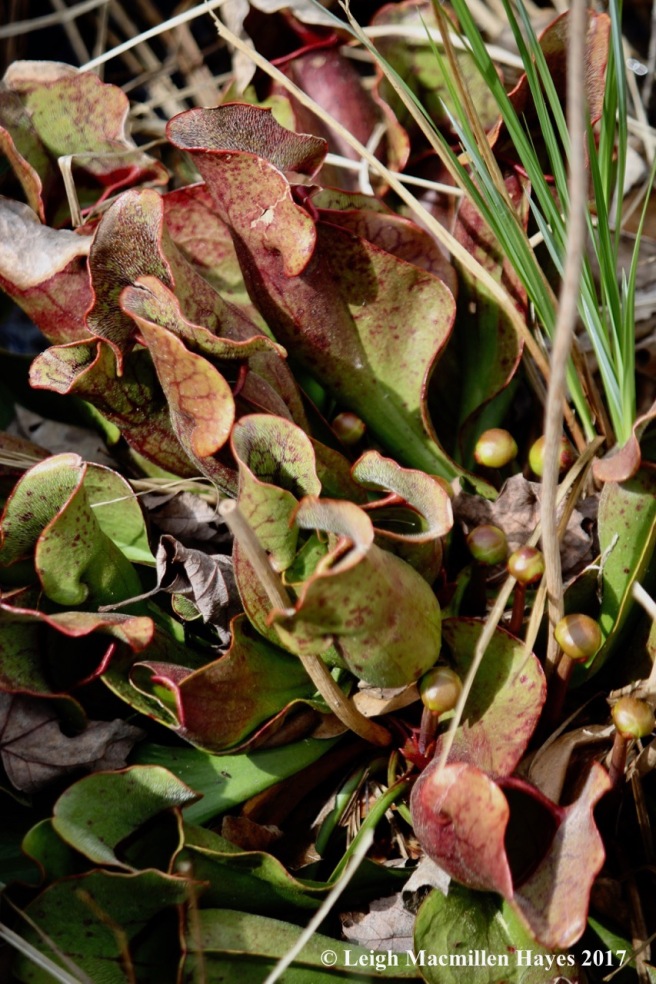 One of the finds Ursula enjoys sharing with others is the pitcher plant, a perennial herb with pitcher-shaped leaves. We noted that this particular one sported new flower buds.

And on another, the otherworldly shape of last year’s now woody flower capsule–its job completed.

Ursula is as awed as I am by the power of the pitcher plants. Color, scent (that I’ve never smelled) and nectar in glands near the top of the pitcher leaf attract insects. Once inside, those downward-pointing hairs make it difficult to leave. So what happens next? The insect eventually drowns in the rainwater, decomposes and is digested by the plant’s liquid, which turns phosphorus and nitrogen released by the insect into supplemental nutrients for the surrounding peat. Interestingly, no “joules” or units of energy are passed on through this process to the plant itself. The plant gathers its energy through the process of photosynthesis instead. 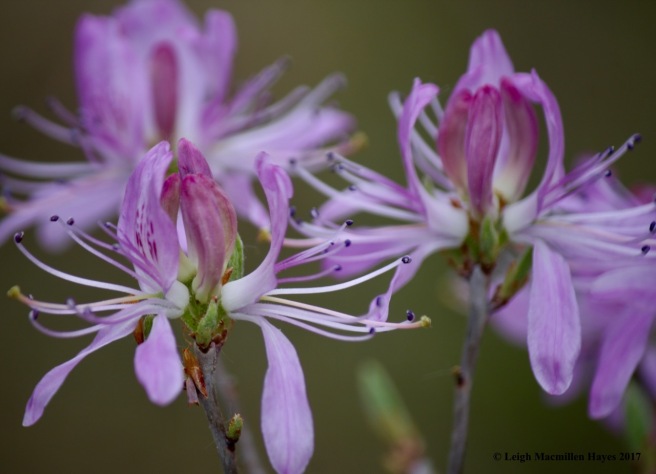 As we continued, we were wowed once again–this time by the sight of the showy rhodora. Rhodora flowers fully before its leaves emerge and so today they were but small nubs located alternately along the shrub’s branches.

But those flowers–oh my! The rose-purple bloom has what’s considered two lips–with the upper consisting of three lobes and the lower of two. And each produces ten purple-tipped stamen surrounding the pistil, where the pollen will germinate into a many-seeded capsule. 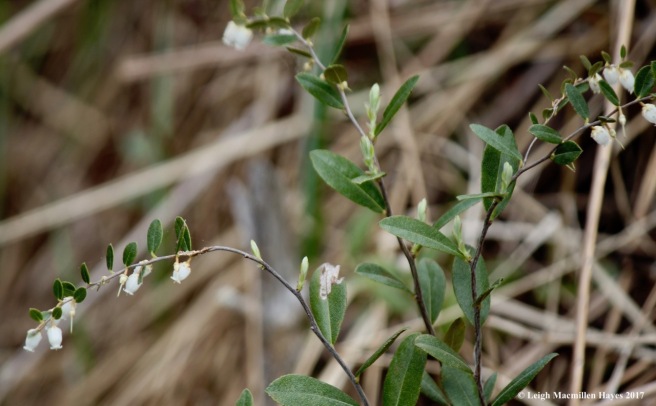 Like the rhodora, another member of the heath family in bloom was the leatherleaf–with bell-shaped flowers formed in leaf axils and dangling below the stem as if it was laundry hung out to dry. One way to differentiate this plant from the highbush blueberries that can be found throughout the preserve, are the alternate, upward-pointing leaves, which decrease in size as your eye moves toward the tip of the stem. 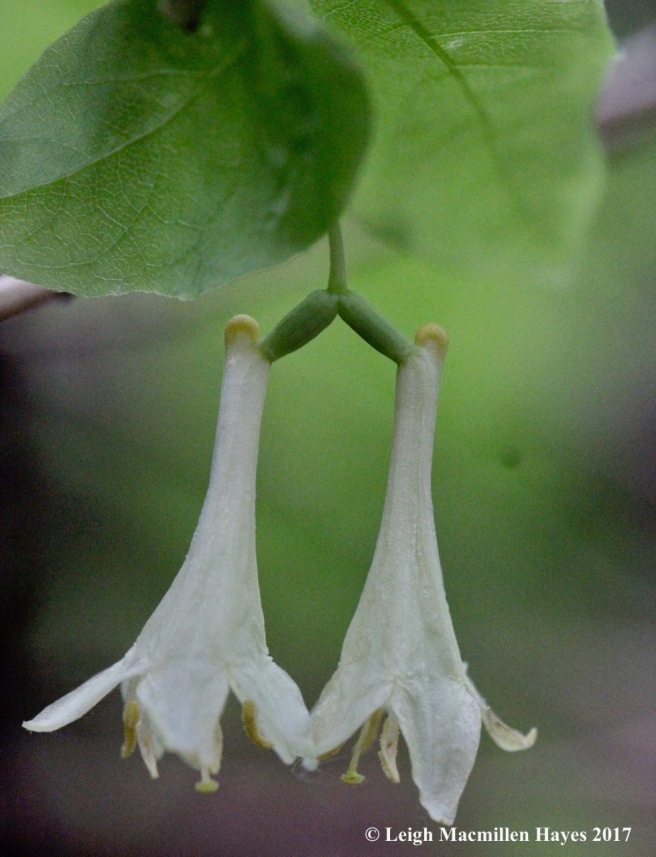 Just before we stepped out onto the Quaking Bog boardwalk, Mary pointed out a native honeysuckle. In my memory bank, I couldn’t remember ever seeing it before, and if I had, well . . . I was glad to make its acquaintance again. 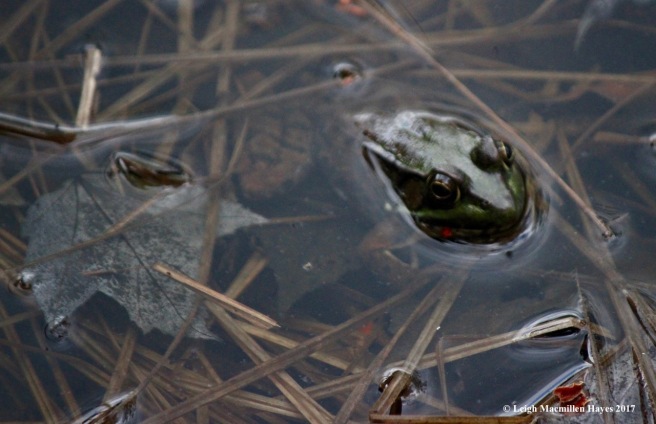 And then we stepped onto the boardwalk. Folks up front paused to admire a green snake, while those of us in the back noticed a green frog. It stayed as calm as possible in hopes that we wouldn’t see it. Nice try. 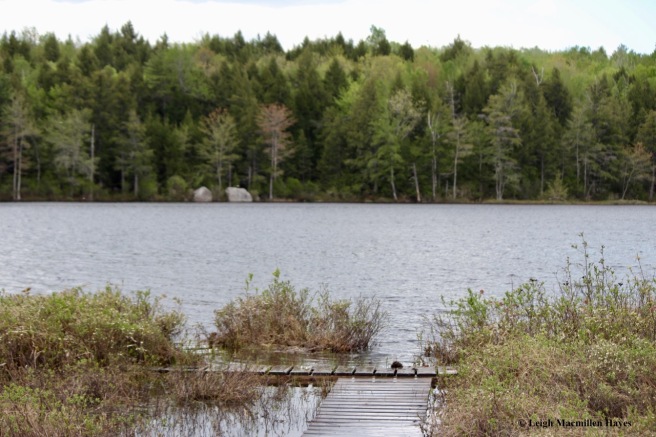 Like all ponds and lakes right now, the water level remains high and so walking the boardwalk meant wet hiking boots. 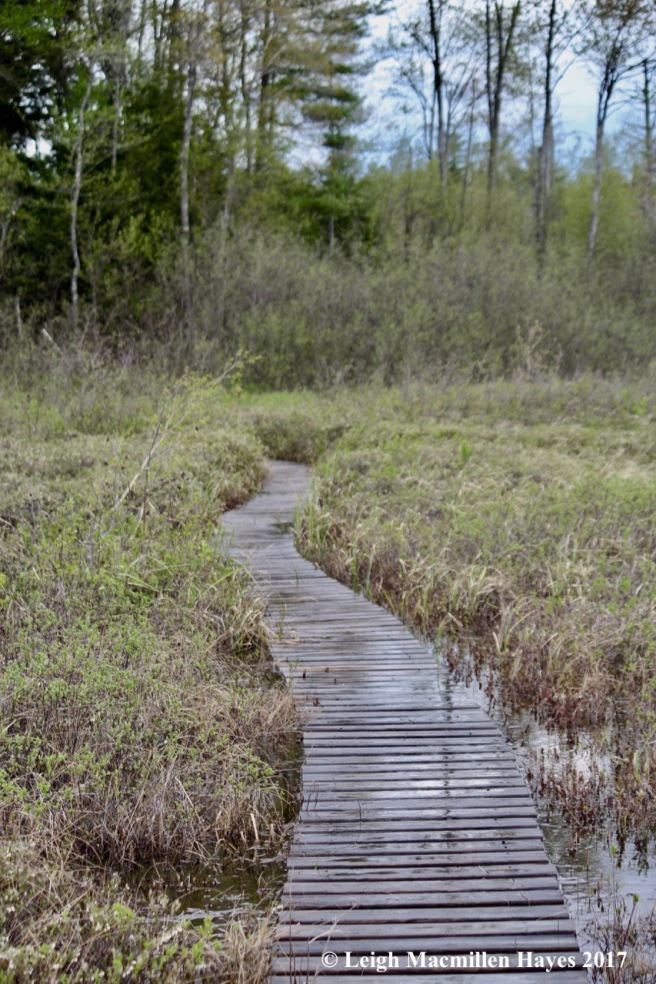 But that didn’t stop some of us. Fortunately, mine are waterproof.

Just before we stepped from the boardwalk back onto land, I saw that the frog was still there.

On the trail again, another showy flower called for our attention–hobblebush. 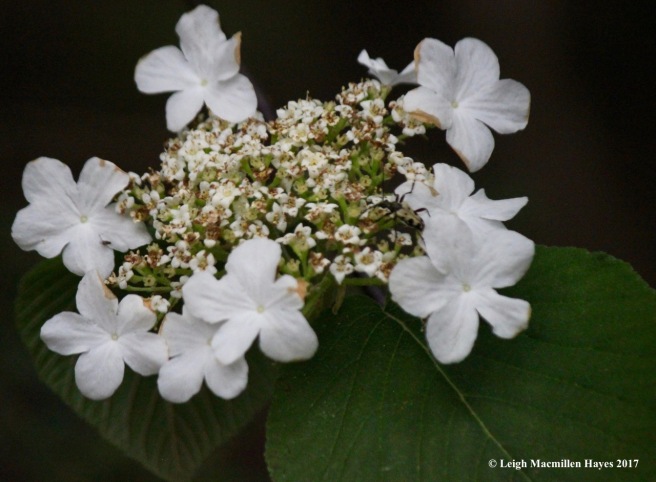 While some looked fresh, others were beginning to pass and their fruits will soon form. We noted the sterile outer blooms that surround the inner array of small fertile flowers. And a beetle paying a visit.

Speaking of insects, a slight movement on the ground pulled us earthward.

We’d found a Mayfly–perhaps just emerged and its wings drying.

In the last wooded section we would cover for the day, we noticed that the two-tiered Indian Cucumber Roots have a few buds. I can’t wait for them to flower soon.

Among the flowers that I’ll always associate with Ursula because she’s the first to have introduced me to them, is the goldthread, so named for its golden-colored root. We usually identify it by its cilantro-shaped leaves, but right now the dainty flowers are not to be missed. What looks like petals are actually sepals and there can be five to seven of them. And stamen–many. Goldthread can feature 5-25 stamen. 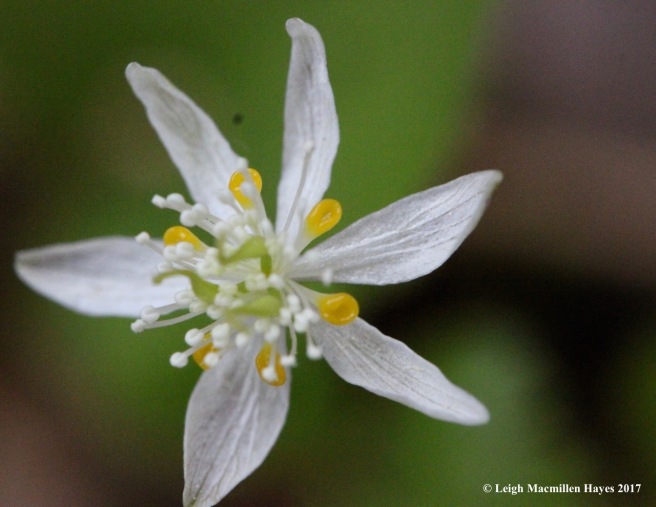 Even the number of yellow-and-green pistils can vary from three to seven. Ah nature–forever making us think.

The other plant I associate with Ursula is dwarf ginseng. Its explosive umbel consists of many flowers. And in this one, a dining crab spider. 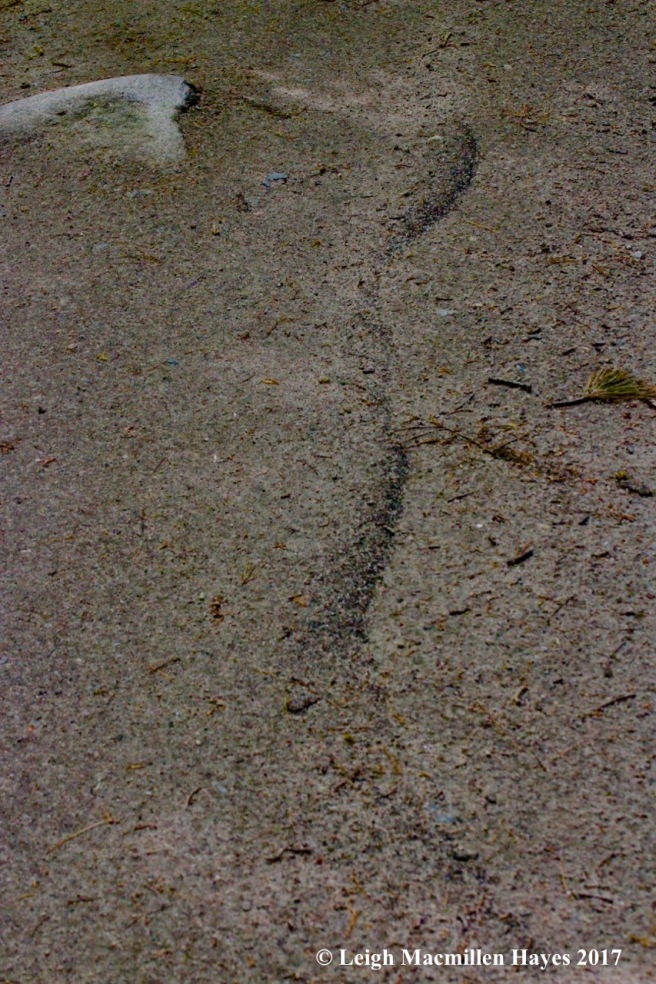 Finally, we found our way to Grist Mill Road and headed back toward the parking lot. But even on the road we found something to wonder about when one member of our group pointed to the curvy black design. In the past, I’ve always dismissed it as some sort of mineral associated with the dirt.

Today, I learned it was none other than those good old spring tails or snow fleas we associate with late winter, but are really present all year. Something new to notice going forward. 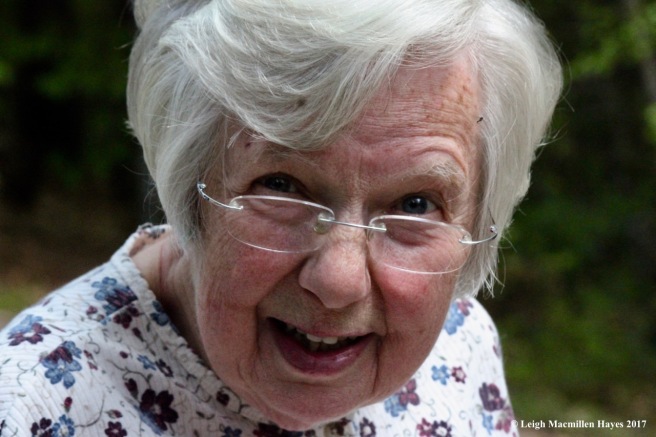 At the end of our walk we all gave thanks to Mary and Ursula. We’d come away with refreshers and new learnings.

And we’d been reminded by Ursula that though she and her husband, Wolfgang, can no longer get out as often as they’d like, after sixty years of marriage they still have fun reminiscing about their many explorations together. A goal for all of us to set.

Most often this wildflower and bird enthusiast walks vicariously with me as she reads my blog entries, but today it was my immense pleasure to walk with her. Thank you, Ursula, for once again sharing your love of all things natural with the rest of us . . . and your optimistic philosophy of life.

Oh and a question for Wolfgang, while Ursula walked with us, did you get on the treadmill?

2 thoughts on “Walking with Ursula”