The old adage, “If at first you don’t succeed, try, try again, ” could be aptly applied to the first part of today’s hike for we’d tried to locate the Millard Chandler Feldspar Mine (aka North Star Mine) in Evans Notch two weeks ago but missed a turn along the way. This time, we made sure to pay close attention as friends had given us specific directions. 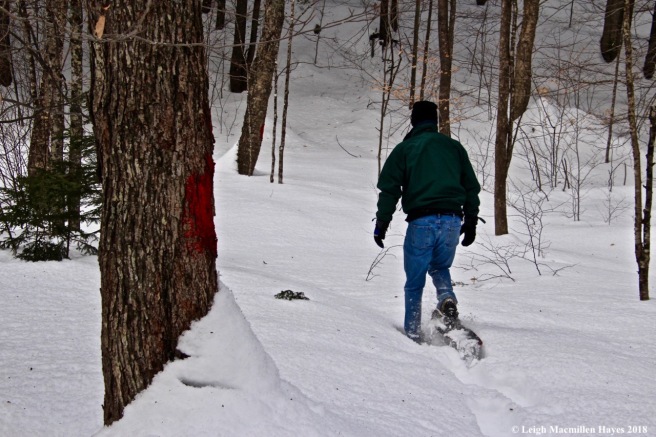 As they’d told us, we remembered to turn left at the National Forest boundary and followed the line to the base of the mountain, breaking trail all the way.

Eventually, we realized we were on an old cart path and followed as it zigzagged up. And then we reached a boulder covered in ice. Don’t get me wrong–I love the relationship of rock and ice, but . . . was this what we’d climbed up to see? 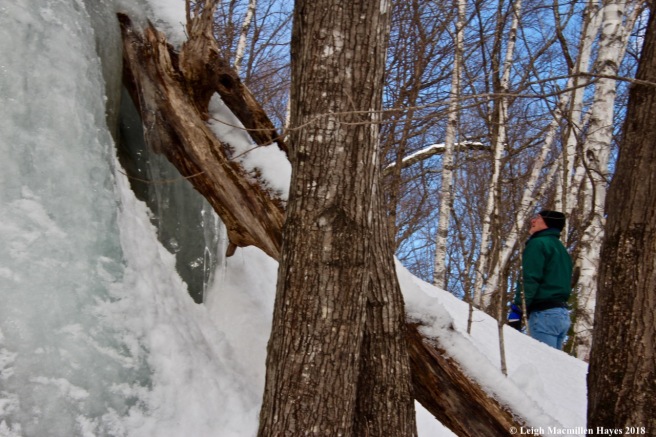 My guy peeked around the corner and encouraged me to follow.

The first rock with ice was a tease and he could see what he thought was the mine up above. And so we climbed higher. 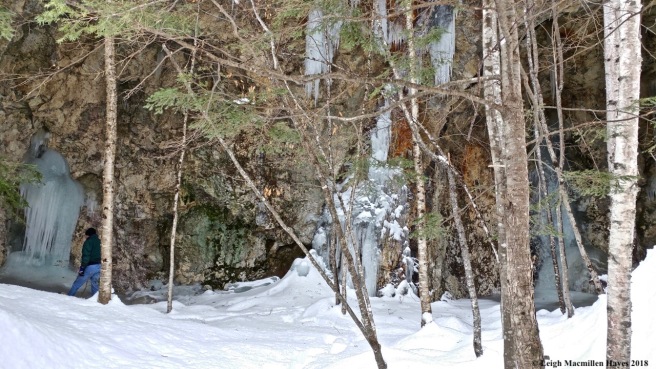 Voilà. At last we found the actual mine. Can you see my guy? His height provided perspective.

He stood in awe before the fountain of youth frozen in time.

My eyes were drawn skyward to the chandeliers that dangled above. My guy did urge me to move out of the way for he feared one might come crashing down. 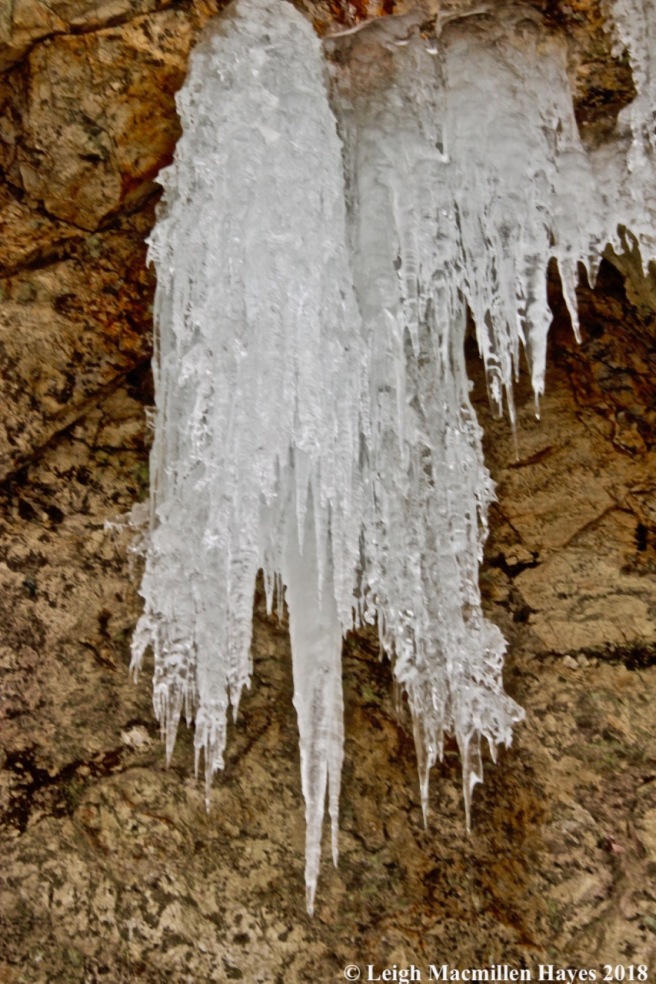 But I took one more photo before heeding his words of caution. 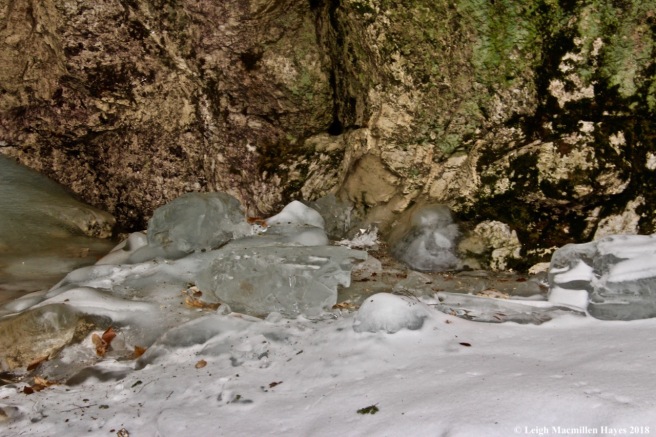 We noted that some had fallen previously and sat like broken glassware upon the mine floor.

Even the snowfleas or spring tails wanted to be part of the display. Do you see them? The little specks that look like black pepper? 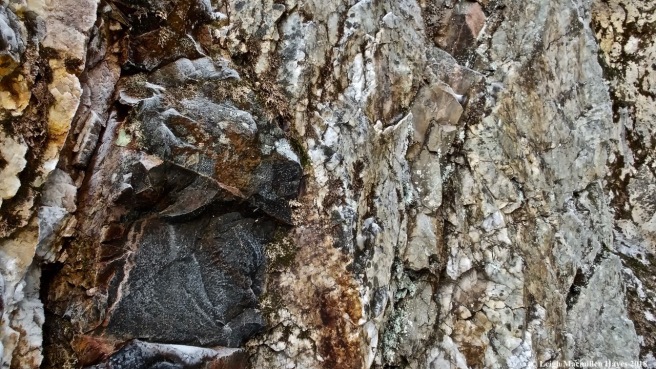 I was so taken with the ice sculptures that I almost forgot about the mine itself. Millard Chandler was a descendent of one of the founding families of Chatham, New Hampshire, where the mine is located. Originally, it was mined for mica. From a Geological Survey Professional Paper, I learned that prior to World War II it was mined for feldspar by the Whitehall Company, Inc. 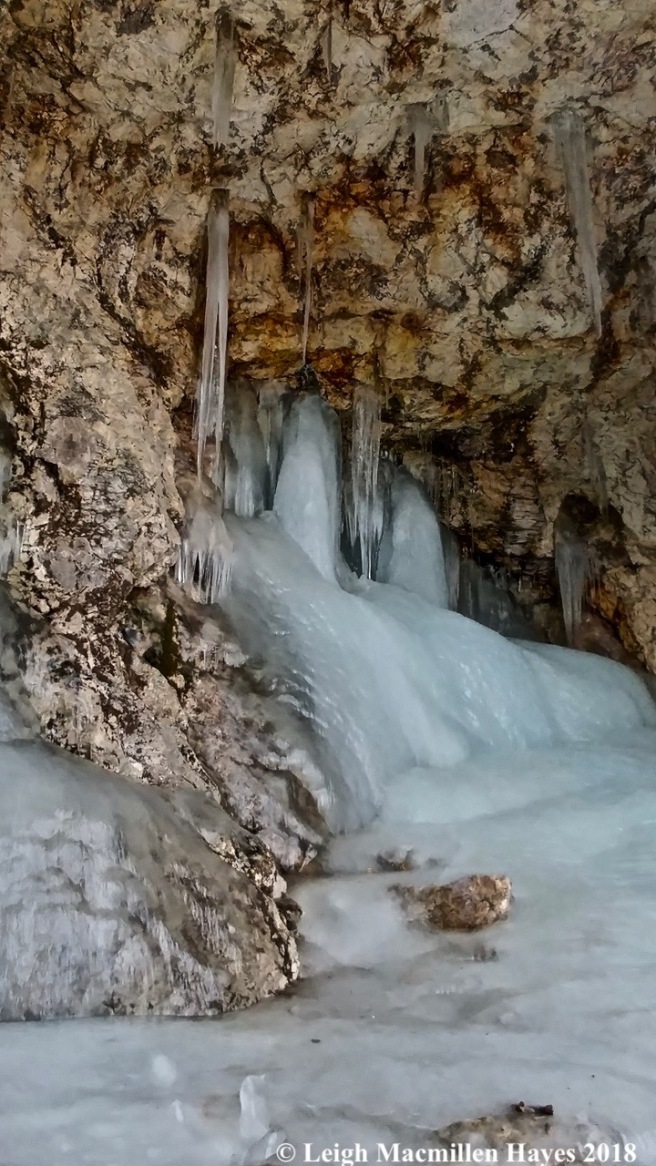 Today, the only mining that took place was initiated by the water and we could hear it trickling under the ice. 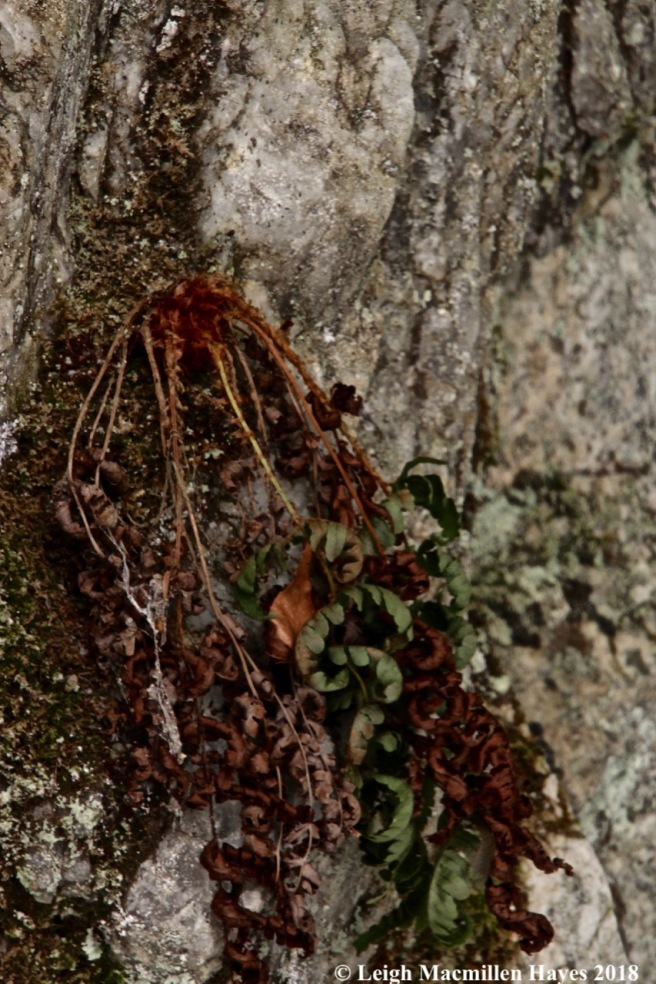 It seemed, however, that there wasn’t enough water as a Christmas Fern struggled to survive.

Finally, we followed the Junco tracks and made our exit. 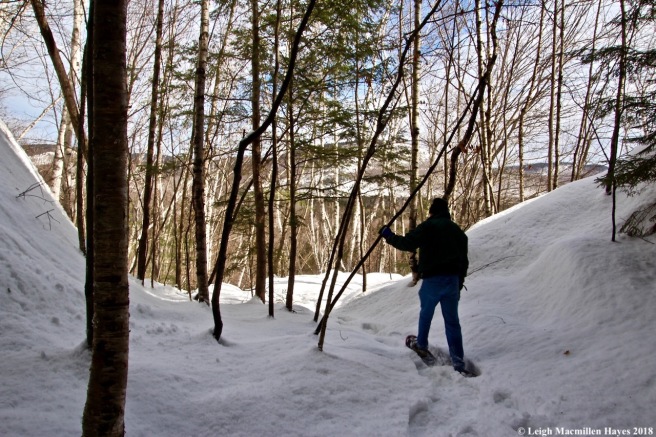 It was almost like a different world awaited us outside the mine.

From there we drove back down Route 113 to Stone House Road and ate a quick lunch in my truck before heading to the trailhead for the Leach Link Trail that follows Cold River. 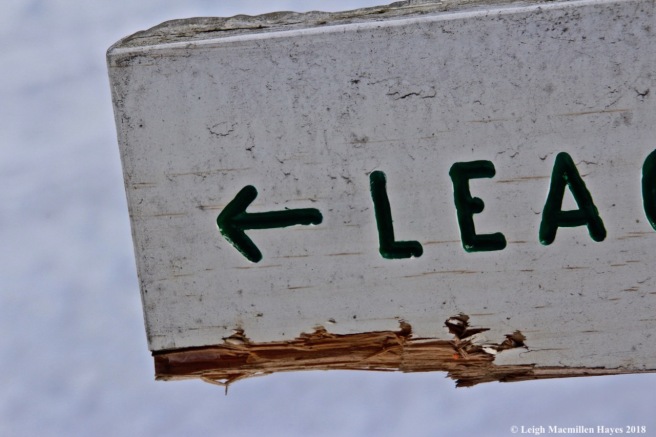 It seems like every time we visit this area we find evidence of the bears who live here. Notice the nail marks on the sign. Typical behavior for a black bear–to attack something in the woods that is different than the norm. Not only do they like telephone poles, but trail signs often take a beating as well. 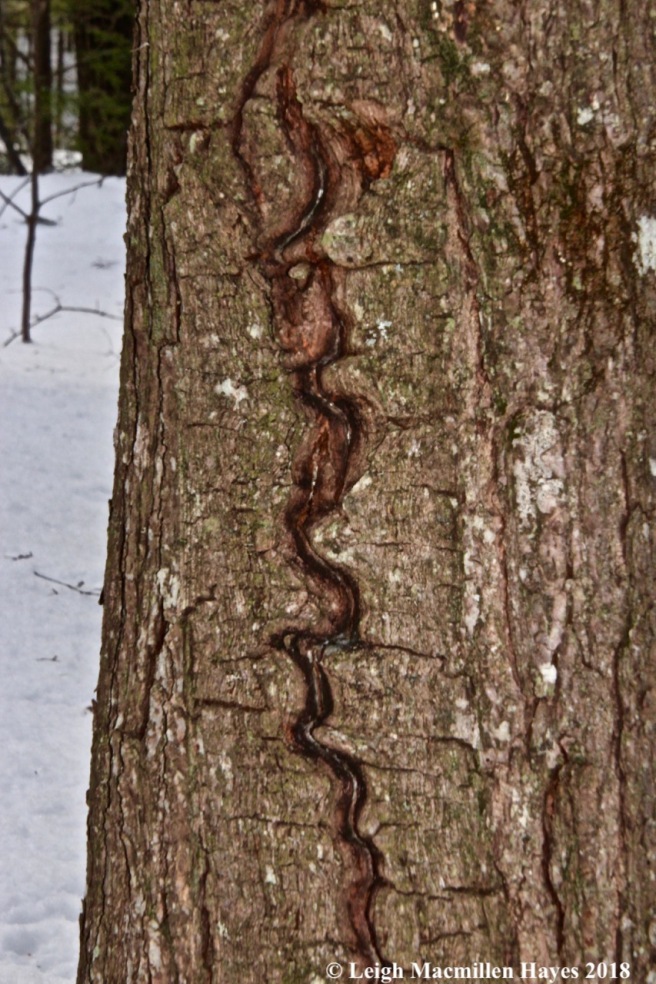 Again, we had to break trail, which we took turns doing because the snow was deep enough to tire us out. For the most part, we passed through a hemlock and spruce forest. I’m always amazed at how a hemlock tree tries to heal a wound left by a frost crack. Just like my snow pants absorb the sun’s heat, the dark bark of the trees also absorb sunlight, but they don’t have a heated home to return to once night falls and temperatures plunge. I understand how the constant thawing/freezing cycle creates cracks–but I don’t understand why the hemlock portrays the squiggly line, while frost cracks on other trees tend to be much straighter. Then again, all tree species have their own patterns and idiosyncrasies. Maybe I just have to accept that this is the way it is. And move on.

We did. But I stopped our forward movement again. Snow had piled high at the base of the trees following the two snowstorms we received this past week. At first, it appeared that the aprons the trees wore were on the north side. But then, in one grove it seemed obvious that my theory had been proven wrong for some aprons faced west and others east. Oh well.

Just over a mile later we reached the Chester Memorial Bridge by the AMC camp. The bridge was given in memory of Mabel Chester, one of the camp’s founders. 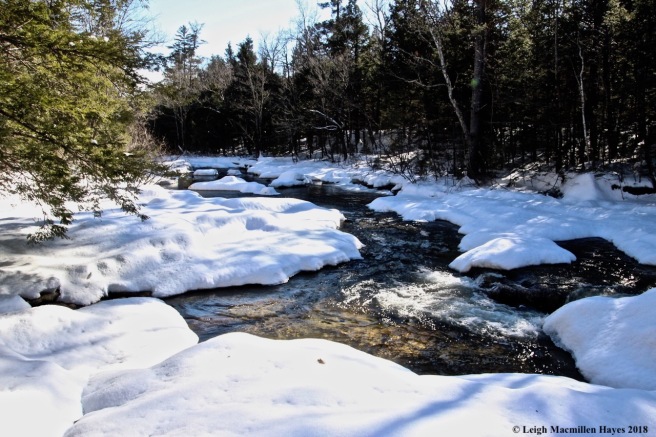 Cold River flowed south below the dam. And we turned east.

We hadn’t intended to, but ended up hiking to the summit of Little Deer Hill. Our visit was short because it was there that the northwest wind slapped our faces and tried to whip off our hats.

A few photos and then we quickly descended back into the forest, where we couldn’t feel the wind’s force to the same degree. We practically ran as we followed the trail we’d previously carved.

It seemed like time passed quickly as we reached the snowmobile trail once again and saw the sign reminding us to stop ahead. The truck was parked near the trail’s stop sign and our trip was done.

We enjoyed the afternoon hike, but as we reflected on our day, it was the mine that will stand out most in our minds. Thanks to Linda, Miriam, and Dave for providing us with the incentive to visit and correcting our directions.

Climbing higher on this Mondate was certainly worth it.